Welcome to Osama Rbayah and his colleagues who have established Jenin, Palestine as a city of peace. Osama is the founder of the Youth Initiative for Peace. Osama has a local and global view of this work for peace, stating, “we work to educate young people and all people in the importance of peace in their lives and we announce Palestine state peace to be the peace springboard to all the world…, all the world deserve to live in peace.” 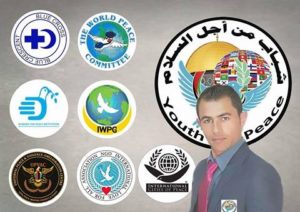 Vision and Mission Statement and Goals

– Declaration of a consistent strategy that violence, murder and war are incompatible with the spirit of religions and with humanity that we were born for it, “the affection and love between individuals, groups and peoples,” because there’s something in us and sets us apart from others is the sense and conscience.

– Farming people on mutual respect and affection for all, where continuing peoples, races, cultures and religions varied to live together in peace, solidarity and safety. 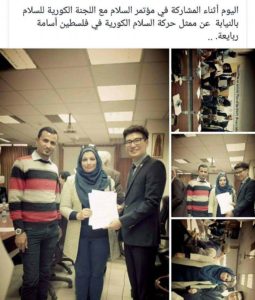 Members of the Youth Initiative for Peace and signatories to the declaration of Jenin, a city of peace.

– Encourage dialogue between all religions culture, where increasing mutual understanding and enhanced mutual trust between individuals and peoples, because these are the basic conditions for real peace.

– Defend the right of every human being to live with dignity and according to the cultural identity and to enjoy freedom of establishment of his own family to enjoy all the rights and duties.

– Open and peaceful dialogue, but we are considering that what separates us from the differences and barriers can not be overcome, but considering that our diversity and our differences from others can be made fit for mutual understanding and to the mutual benefit of all. 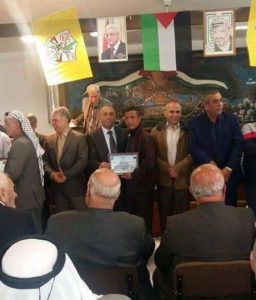 – To forgive each other for the mistakes of the past, present and prejudices, and we are committed to doing and support joint efforts to overcome selfishness, hatred and violence, learners from the past that peace without justice is not real peace.

– To stand by those who are suffering and who are exposed to the misery and neglect, and we are committed to be a voice for those who have no voice, workers in practice to overcome these desperate situations, and convinced that a human being can not be happy alone.

– Adopting the cry of those who do not Ardkhoun to violence and evil, and are committed to contributing, with all our strength and our best and our time, in human give all the reasons for hope, security and justice and peace and the right to a decent living.

– Encourage every initiative promotes friendship and cooperation between peoples.

– Urge those responsible for the destinies of nations and peoples, governors and heads of state, to make every possible effort to build a world of solidarity and love and enjoy peace based on justice and Equality and mutual respect between everyone. 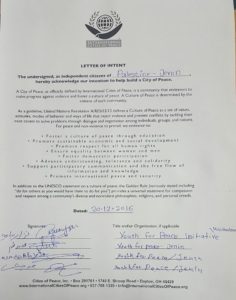 We urgently need at the present time to the mainstream culture of reconciliation and forgiveness, peace and coexistence within the home, Palestinians in particular and the Middle East in general, and to bring the views of the disputed Palestinian.

The Arab and regional levels, and the fact that Palestinian society is young and cultured society, we affirm its role in the activation of a culture of peace. And forgiveness, reconciliation and coexistence.

In order to be a Palestinian youth influential and effective role it must be to strengthen its role through the following:

• And risks through seminars, debates and workshops at universities and institutions of civil society and private centers
Palestinian youth, schools, targeting all sectors of society, including women.

• Fruitful exploitation of the means of objective media to educate young people to the Palestinian cause and the convergence of views between the different currents of thought.

• Break the silence, and the emphasis on the duty of the Palestinian youth of political and social reform.

• Teamwork by guiding youth groups through the means of packaging and pressure and the crowd against the decision-makers in the two parts of the country to achieve reconciliation and peace and coexistence.

• Focus on political unity and for achieving the objectives per the supreme interests of the Palestinian people with interest in the participation of all the people of the communities.

• Support the orientations of the Palestinian leadership to achieve a just and comprehensive peace in the Middle East through negotiations, provided that the cover Arabic. 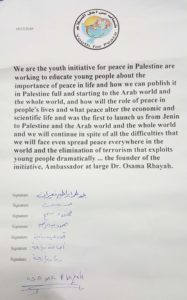 Osama Abdel-Razeq Mahmoud Rbayah is the founder of the Youth Initiative for Peace. He holds an honorary Dr. in the field of world peace from UNHCR. Osama also holds the title of best influential figure in humanitarian and peace in the Arab world among 100 Arab figures. 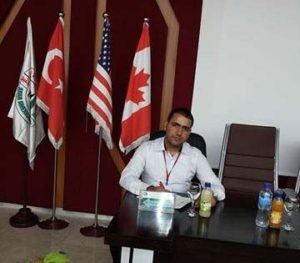 ABOUT JENIN, PALESTINE (from Wikipedia)

Jenin is a Palestinian city in the northern West Bank. It serves as the administrative center of the Jenin Governorate and is a major center for the surrounding towns. In 2007 the city had a population of 39,004. Jenin is under the administration of the Palestinian Authority.

Jenin was known in ancient times as the village of “Ein-Jenin” or “Tel Jenin”. Tell Jenin, is located at the center of what is today Jenin’s business district. The word “‘ayn” means “water spring” in Arabic and Hebrew, and the word “Jenin” might be related to the Hebrew word גַּן‎ (“gan”) and the Arabic word جنّة (janna), both of which mean “garden”. The Arabicized name “Jenin” ultimately derives from this ancient name. The association of Jenin with the biblical city of Ein-Ganim was recognized by Ishtori Haparchi. 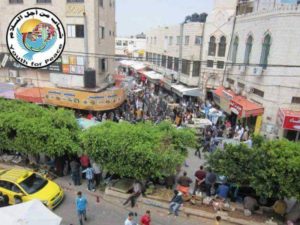 The Palestinian National Authority (PA or PNA; Arabic: السلطة الوطنية الفلسطينية‎‎ as-Sulṭa al-Waṭanīya al-Filasṭīnīya) is the interim self-government body established in 1994 following the Gaza–Jericho Agreement to govern the Gaza Strip and Areas A and B of the West Bank, as a consequence of the 1993 Oslo Accords. Following elections in 2006 and the subsequent Gaza conflict between the Fatah and Hamas parties, its authority had extended only in areas A and B of the West Bank. Since January 2013, the Fatah-controlled Palestinian Authority uses the name “State of Palestine” on official documents.