We welcome Maria Amendola who, along with colleagues and citizens of her community, have established Agropoli, Italy as an International City of Peace.

We walk in the “footsteps” of our ancestors, on history and on memory and it is necessary to preserve the past in order to have a better future. “Modernity must take charge of history and the future at the same time”, I have been pursuing this for years vision and storytelling to recover and spread “memories” that are being lost. We must commit ourselves to a world deeply linked to the principle of “respect for memory”, which has its roots in history, culture, knowledge and respect for life. 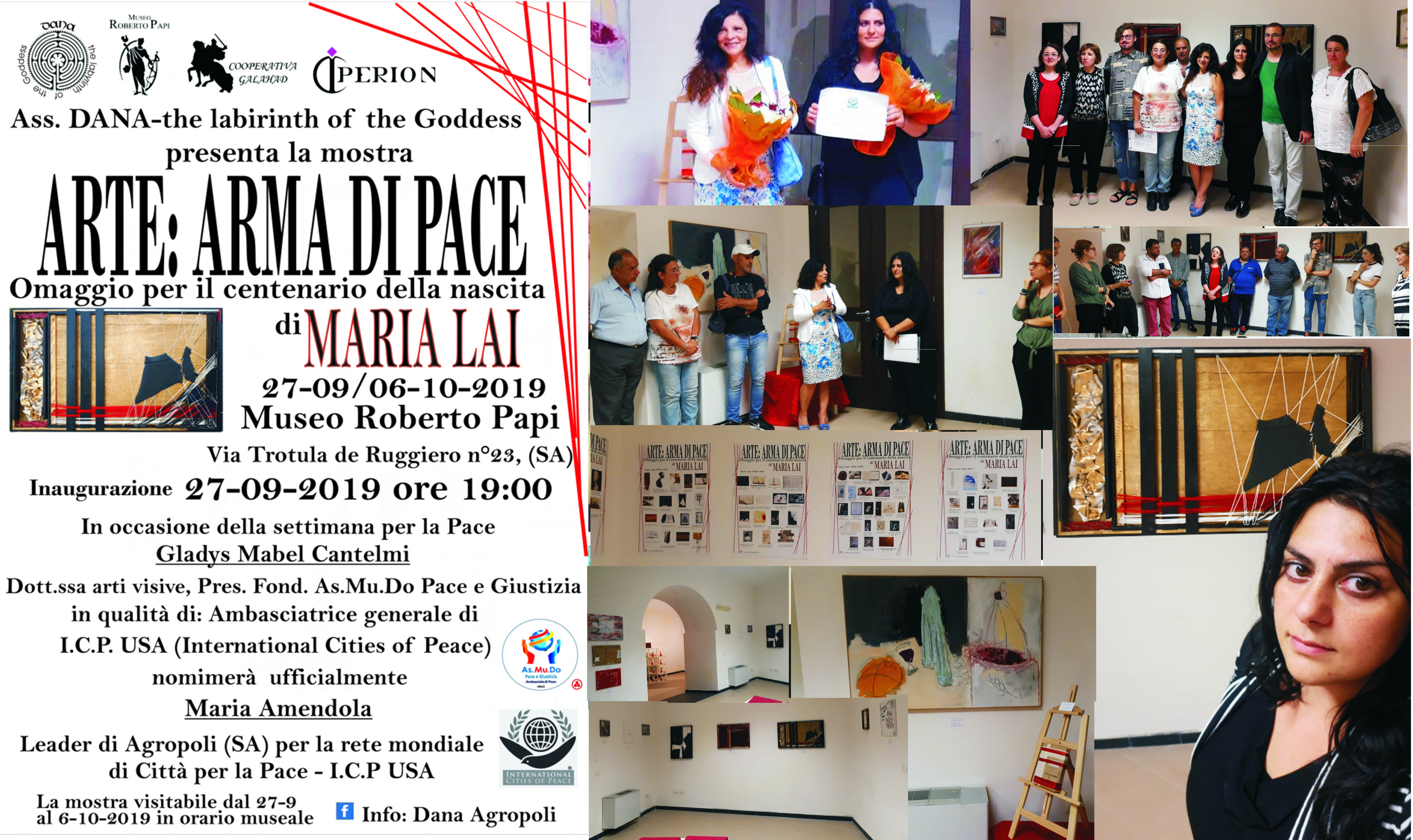 Every year in Agropoli, in the province of Salerno, a peace concert takes place, in 2019 it has reached its 18th edition. Other initiatives for the most part consist of institutional activities, of the diocesan Catholic Action and events promoted by the various bodies and voluntary associations through charitable initiatives or for the promotion and awareness of the latter.

Unfortunately, in the contemporary world, there is a veil, which becomes increasingly heavy, closing towards the other, fueled by the rampant consumerism of our society and by a profound individualism. Despite the exponential technological diffusion that allows us to be always in connection with the world, in continuous communication, all, but above all the new generations, we run the risk of being imprisoned in this technological limbo that leads to a drying up of human relationships and a progressive loss of empathy. 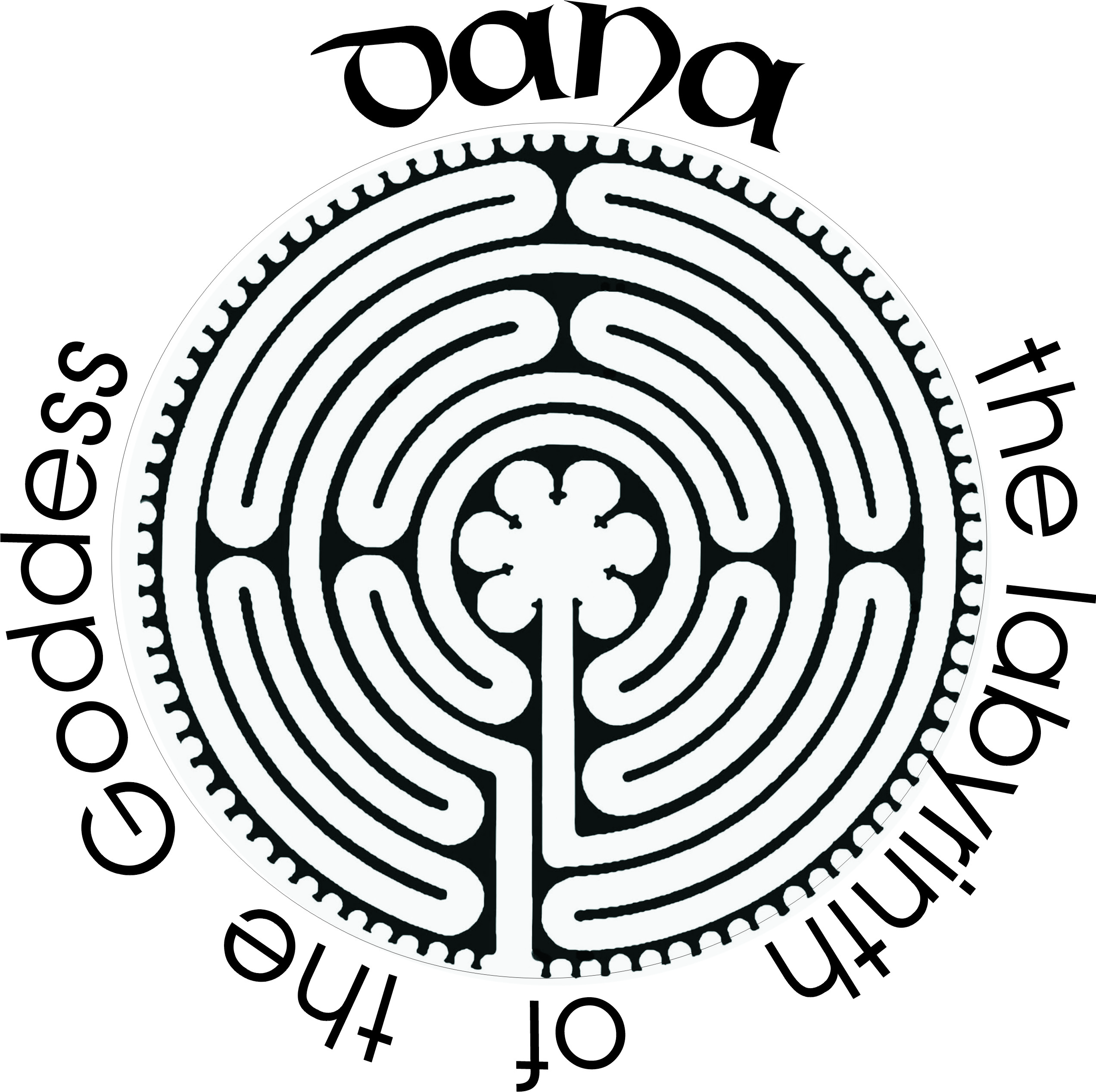 Pursuing peace cannot ignore the protection of the conditions that generate and support it: living in harmony with the context that hosts us; have respect for others and their history; share the same desire and desire to defend different cultures and eliminate probable situations of misunderstanding. It is above all non-knowledge that determines situations of hostility and conflict that can be contrasted and overcome only through the safeguarding and defense of historical memory and the acquisition of new knowledge through the tools and “weapons” of art and culture . 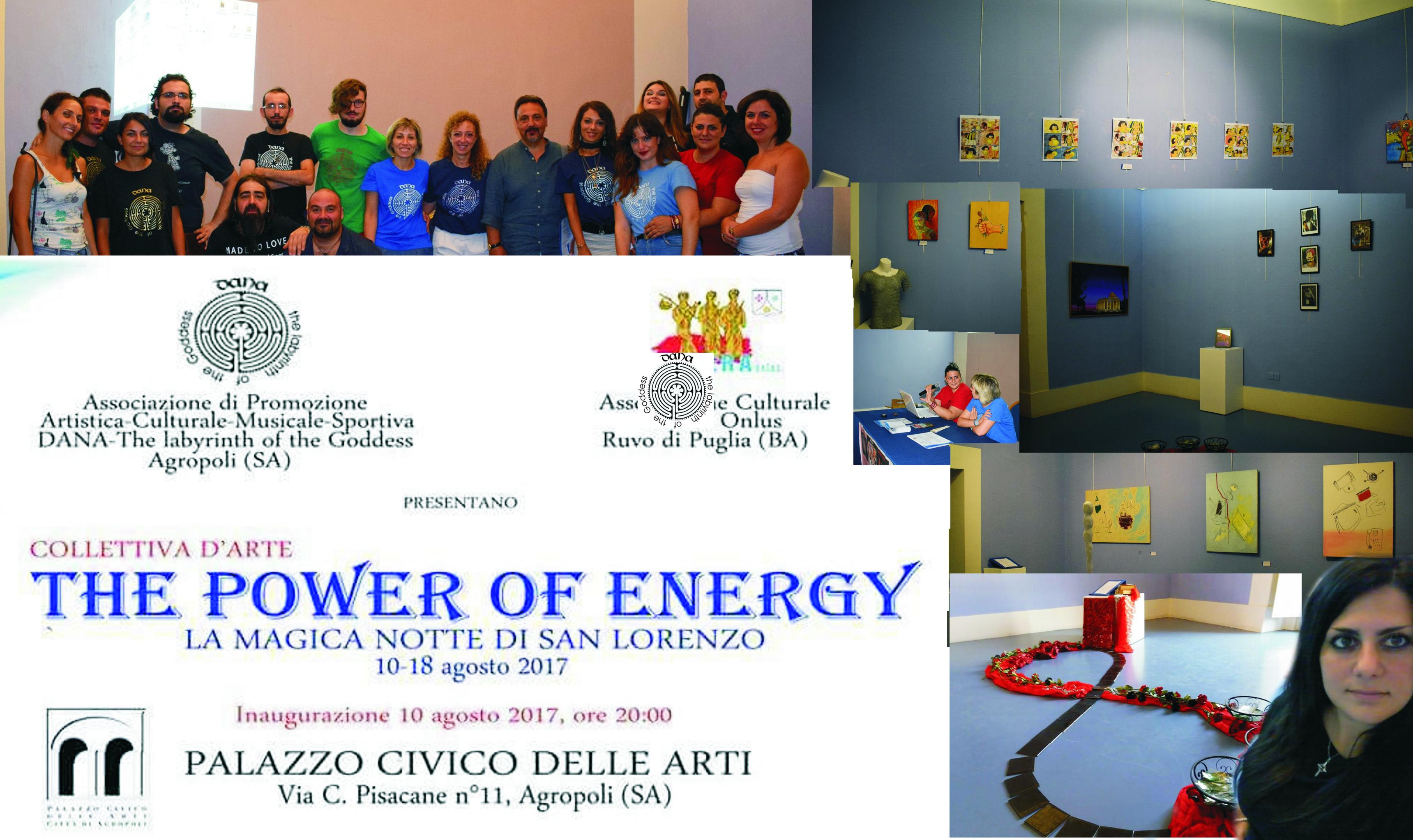 Dostoevsky wrote: “Beauty will save the world”, a very significant phrase. Certainly he was not referring to the obsessed search for aesthetic perfection that today is pursued at all costs and by any means, but to beauty understood as “goodness”. The world will be able to heal if a vision of widespread beauty and harmony returns to being the natural landing place for a “renewed humanity” that abandons its individual selfishness.

Our era is sick with brutality and a profound individualism that generate continuous conflict. The heated and violent clash of opposing positions and different points of view are difficult to reconcile with a culture of Peace that becomes difficult to promote.

Trying to keep the essence of this beauty message alive can be achieved through various artistic events that aim to achieve the following objectives:

– social awareness of culture;
– dissemination of knowledge;
– the development of a memory safeguard plan;
– the recovery of historical memories of more or less known figures;
– the “Sparks of Peace” project.

The itinerant project will develop into artistic and cultural events, conferences and debates, artistic exhibitions and other initiatives: the accent will be placed on the various aspects and subjects that make up the complex “mosaic” of Peace. 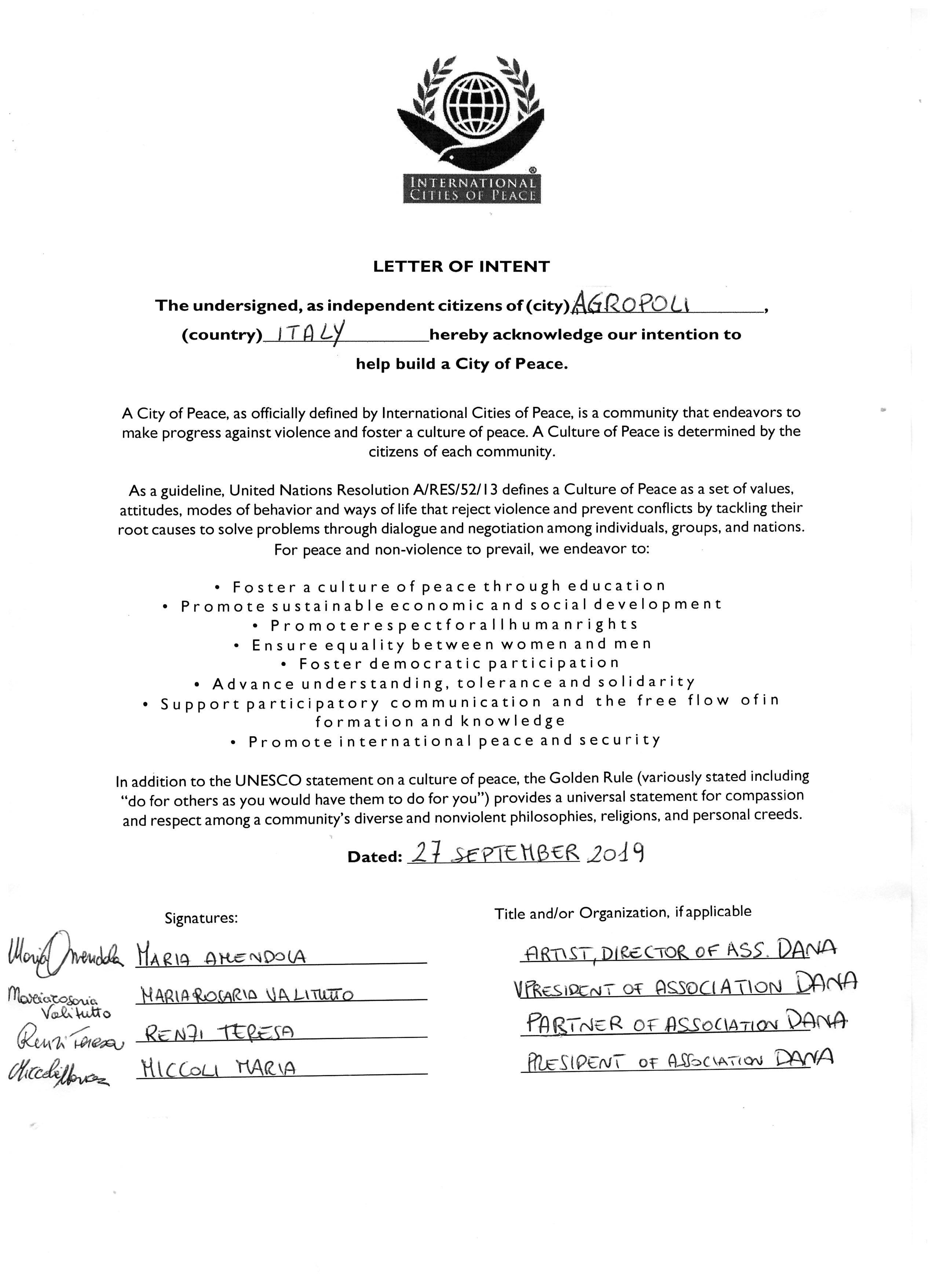 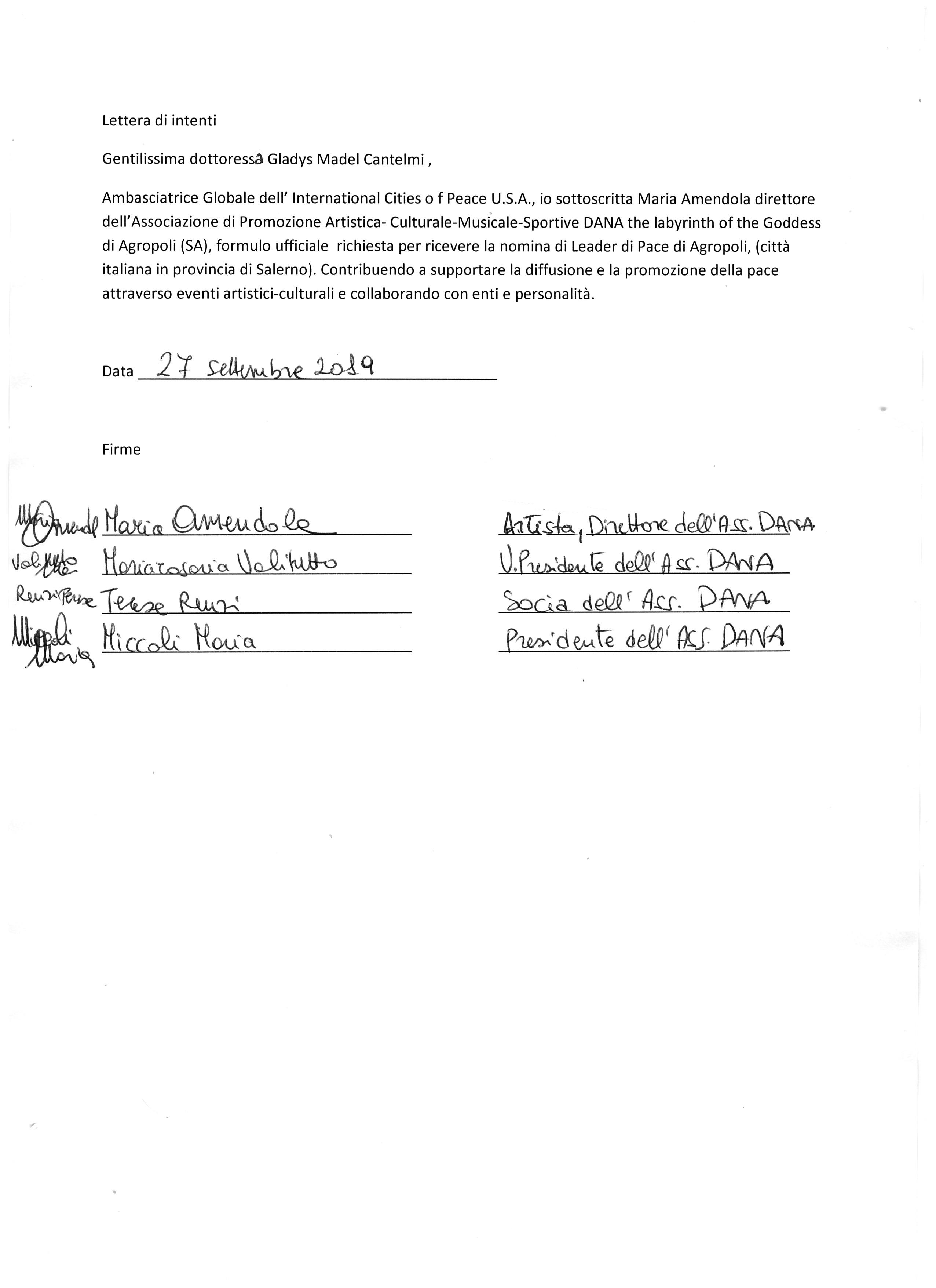 Maria Amendola, born in 1984, is an artist with a lively creativity and a passionate connoisseur of history, heraldry, toponymy and female dentistry to whom she dedicates the best energies and daily research and studies. 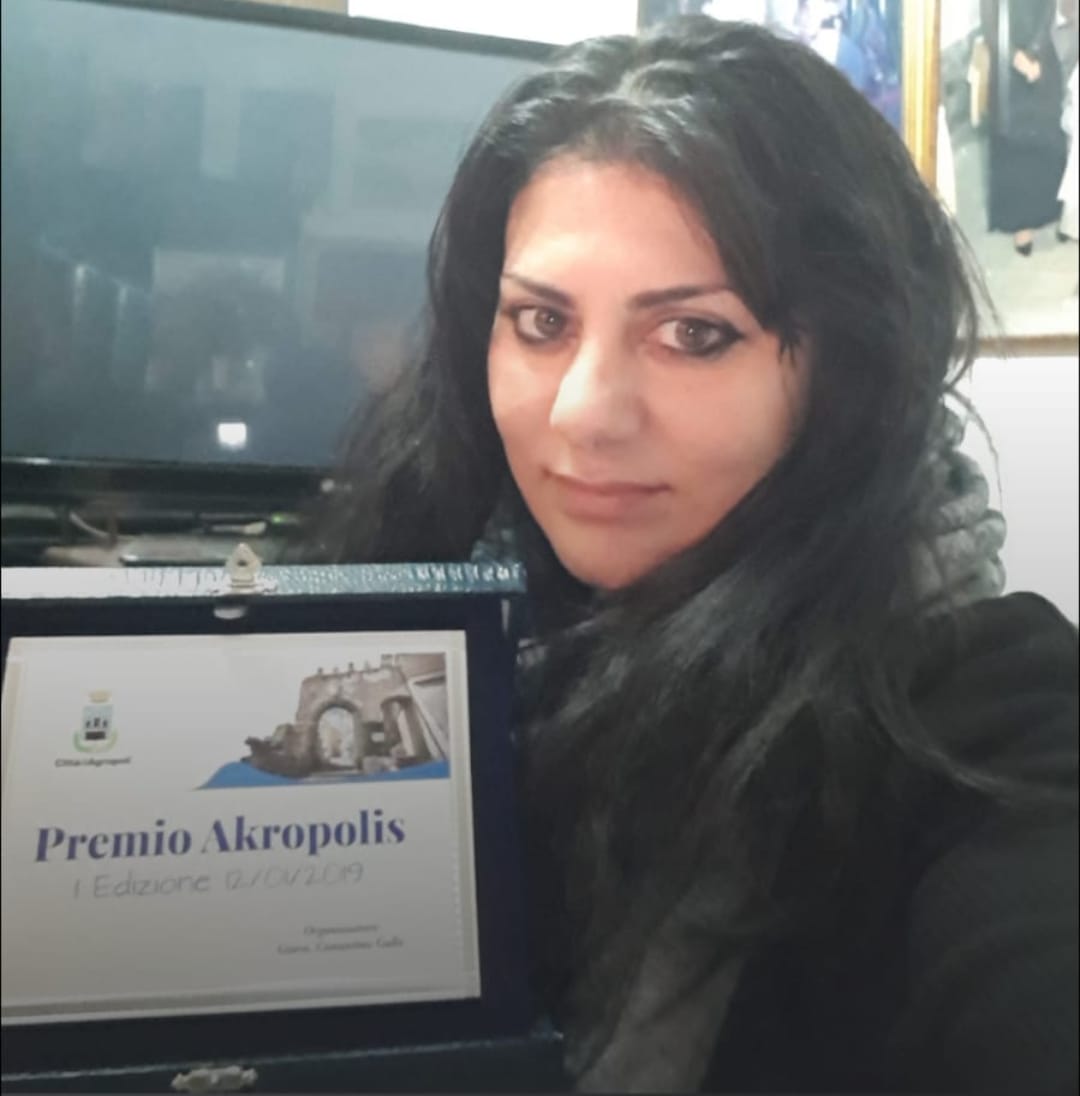 After graduating, he enrolled at the University of Salerno in the degree course in Cultural Heritage. From 2008 to 2011 she is a volunteer of the National Civil Protection. In 2009 he began his research on the role of women in past societies that will form the basis for his future reflections and studies on female figures in various fields in art, history, toponymy, literature and science. In November 2011 his artistic career began to take shape and define himself in what will be the characteristic features of his art: an elegant abstract and material technique combined with elements taken from reality.

Through the art of weaving the female universe is represented: from ancient myths through the Fates, from Arachne to Penelope to get to the contemporary world with the artist Maria Lai. The peculiar elements of his artistic practice are: the red color, the threads and the fabric. The red color has always been associated with the female dimension; the threads represent, in their simplicity, the social and emotional ties of women; while the fabric transports the artist’s experience and presence into the work.

In 2013 he began “Experimentations”, an artistic and cultural project that has the ambition to tell the female world, in its many and varied facets, through 22 exhibitions, including “Maleventum”, “Women and Freedom”, “Alpha”, “Fragile” and “Stateless”. He has exhibited in various museums, galleries and art fairs and in impromptu exhibitions in major Italian cities.

She has exhibited in various museums in personal exhibitions: Museo Roberto Papi (SA), MOA Museum Of Operation Avalanche (Eboli, SA) and Museo Paestum in the Grand Tour routes (Capaccio, SA). She is also present at Expo Milano 2015. She has received various awards for her artistic career and has won various awards, among them in 2017 the medal of Princess Sichelgaita of Salerno of the Lions for the female toponymy project “Apolide” and the plaque for having been selection at the final of the Rome Biennale 2020 with a tribute work Maria Lai. 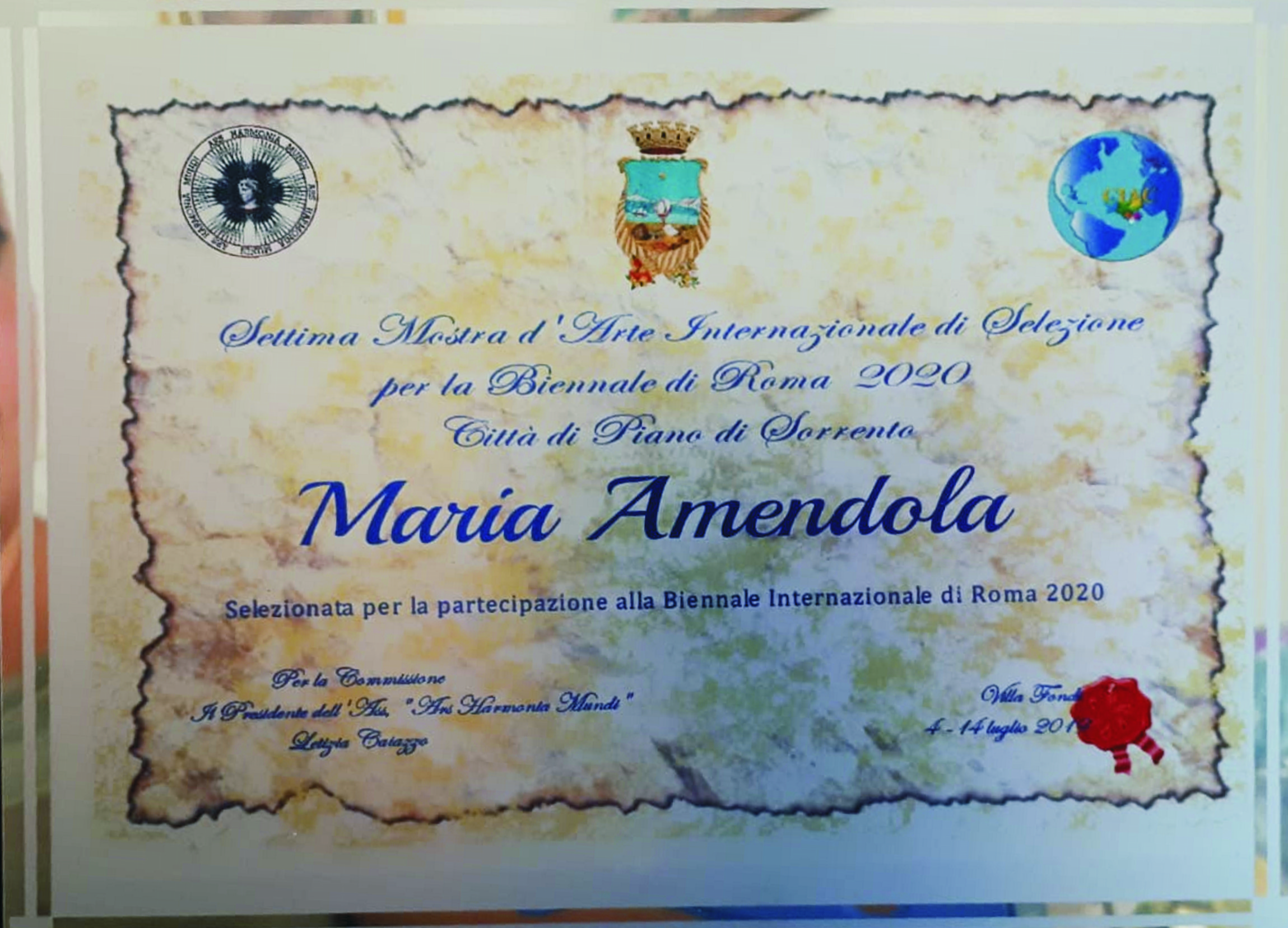 It is present at foreign exhibitions in Portugal, Nepal, Ecuador, Denmark and Amsterdam. In 2019, on the occasion of the centenary of the birth of Maria Lai, he pays tribute to the Sardinian artist with his finalist work at the Rome 2020 Biennale and with the collective exhibition “Art: weapon of Peace” with the DANA Association. 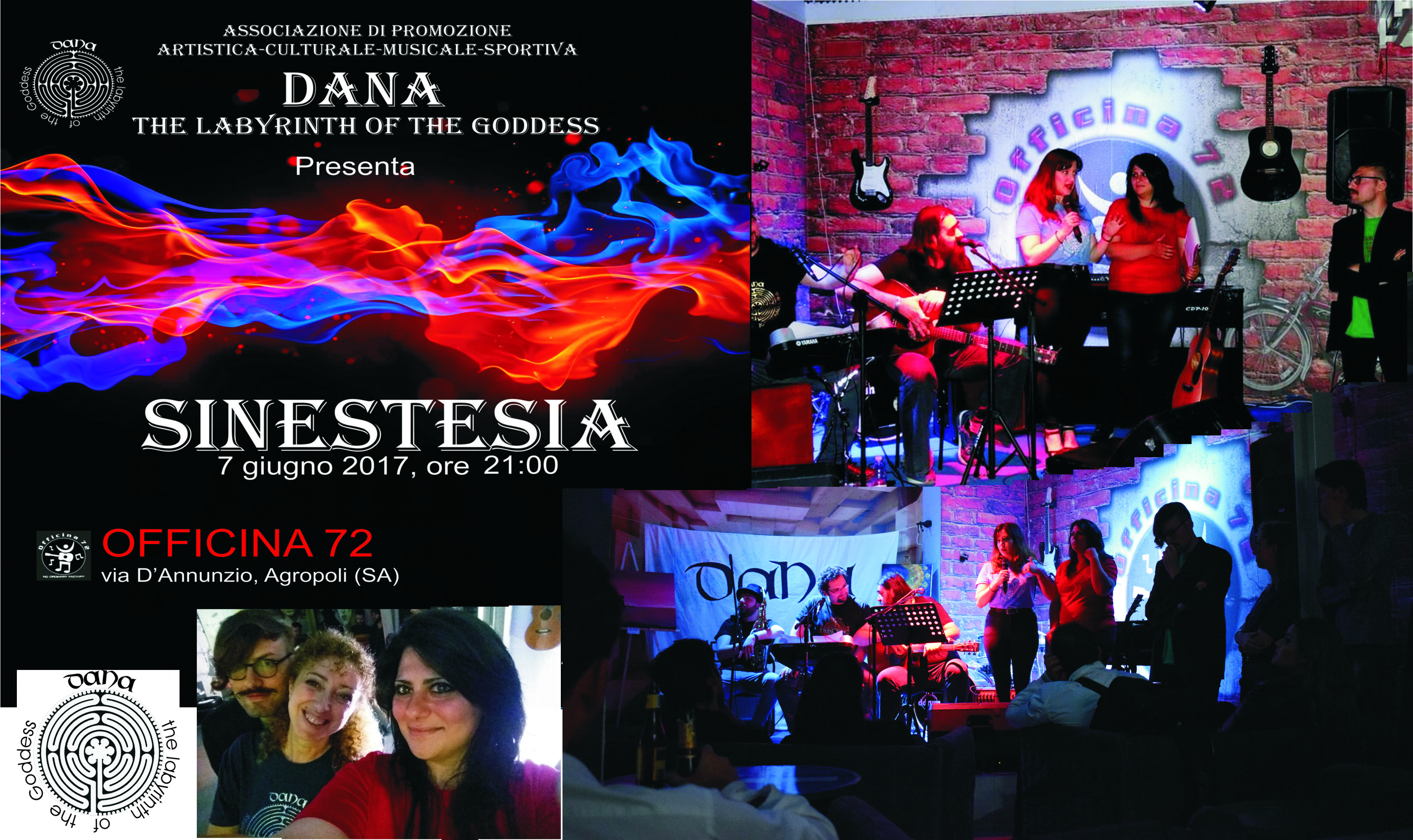 From 2017 he founded and became Artistic Director of the DANA-The labyrinth of the Goddess Artistic-Cultural-Musical-Sports Association of Agropoli and from 2018 he is Coordinator of the DANA artists group for the international project “Heart of Woman” of Ambassador Gladys Mabel Cantelmi.

In addition, central to his way of making art is constant comparison and continuous dialogue to create new relationships and network through ever greater collaborations both with other artists and with various associations, prolum and cultural bodies.

Dr. Gladys Mabel Cantelmi is leader of Sarno: International City of Peace. She is a world renown visual artist and ambassador of peace. 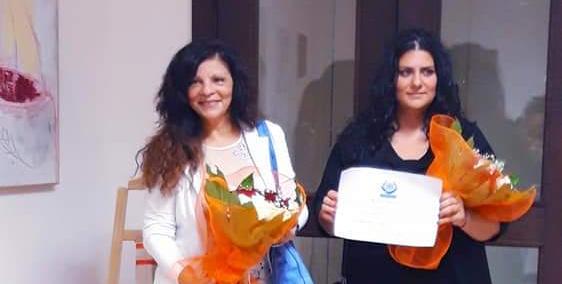 ABOUT AGROPOLI, ITALY (from Wikipedia)

“And what is that high cliff that appears paved to the top by small fields as by an elegant geometry? And why does the grass, almost blue on that cliff, turn restless, like from a tattoo under-skin to an enameled gall? I will see later the other hip, naked and rough: it is the tip of Agropoli, and, like a kangaroo, on its belly, hiding it from the sea, it carries its city: a single road that houses make narrow, which abruptly it becomes almost vertical, and offers us a perspective of people scattered on motorbikes.”

So Giuseppe Ungaretti portrayed Agropoli in his work “The desert and after”. He visited the village in the early thirties of the nineteenth century, was kidnapped and did not fail to define Cilento as a “hospitable land, asylum land!”.

Agropoli is an Italian municipality, an ancient maritime village rich in history and traditions, in the province of Salerno, in Campania, located at 24 meters above sea level.

The territory of Agropoli was frequented starting from the Neolithic; used by the Greeks for commercial exchanges; suffered the incursions of the Vandals in the fifth century; was “Acropolis” stronghold between 535 and 553 with the Greek-Gothic war; it was a refuge for the bishop of Paestum at the end of the 6th century to escape the Lombards; Agropoli grew and became the seat of a bishopric with the arrival of Byzantine refugees from Lucania. In 882 the Byzantines were driven out by the Saracens, who built a ribàt (new fortification): from here attacks began on neighboring towns as far as Salerno. In 915 the Saracens were driven out and Agropoli returned to the bishops who dominated it throughout the medieval period. In 1412 the fiefdoms of Agropoli and Castellabate were ceded by Pope Gregory XII to the king Ladislao of Durazzo (1386 – 1414). On 20 July 1436 Alfonso V of Aragon granted the fiefdoms of Agropoli and Castellabate to Giovanni Sanseverino, former count of Marsico and baron of Cilento. Only in 1443 did the king regain possession of the territory. Subsequently Agropoli came under the dominion of several families: between 1505 and 1507 the D’Avalos marquises del Vasto and, until 1552, the Sanseverino, in 1553, Agropoli passed to the D’Ayerbo of Aragon, in 1564 to the Grimaldi, in 1597 to the Arcella Caracciolo family, in 1607 to the Mendoza family, in 1626 to the Filomarino family, in 1650 to the Mastrillo family, who alternated for a short period with the Zazzero of Aragon. The Sanfelice, Dukes of Laureana, retained power over the town until the abolition of the feudal system. In the nineteenth century Agropoli began expansion beyond the ancient village. From 1811 to 1860 it was part of the district of Torchiara, belonging to the district of Vallo of the Kingdom of the Two Sicilies. From 1860 to 1927, during the Kingdom of Italy it was part of the Torchiara district, belonging to the district of Vallo della Lucania.

With the Decree of the President of the Republic of 9 January 2004 it had the title of City.

Agropoli is rich in monuments and places of interest such as: the entrance door to the historic center which is surmounted by the coat of arms that originally decorated the castle entrance; the stairs of the ancient village; the castle; the Punta Fortino lighthouse; the tower of San Marco; the S. Francesco tower and the homonymous rock; the furnace; the Mother Church of Saints Peter and Paul; the port; the Church of Santa Maria di Costantinopoli; the monument to the fallen; monument of the fallen in the sea; the statue of San Francesco and the bay of San Francesco.

Agropoli has been recognized for the clean sea for several years: the “Blue Flag”.

The most notable manifestations are: the concert for peace, the feast of Our Lady of Constantinople; the well-known carnival, the procession of Saints Peter and Paul, the May of books.