Welcome to Priya Agrawal, Child Poetess, and the citizens of Ahmedabad, India: City of Peace. Priya has earned many honors for her writing and will extend her peacebuilding efforts to help foster a culture of peace in Ahmedabad. 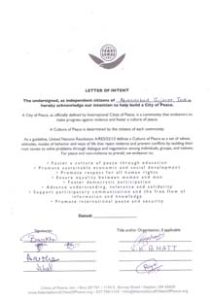 As Priya says, “International Cities of Peace is such a world wide association that brings all the cities of the different countries of the world together. The people will remain in touch with me on facebook, via calls and through my website. Whatever work will be done in the process of bringing peace in the city, they will be involved in this process. Thus, being together, a city can be made a City of Peace.” 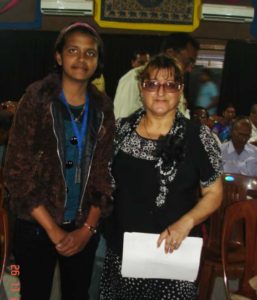 VISION
To foster peace in the World by living an Impersonal life ( life
that is not personal or individualistic ) in the service of Self, in
which an individual is transcended and one lives life in the Self. 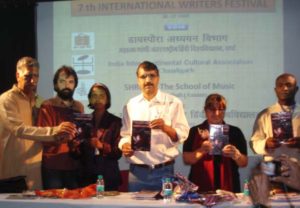 MISSION STATEMENT
To provide a large spectrum of World Peace to the people
of the World and changing their mind set by writing
poetries and motivating them to reject violence and
embrace love, respect and brotherhood for others. 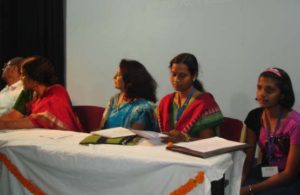 (1) To create awareness among the people of the community and develop the feeling of love, humanity, brotherhood.
(2) To keep them away from hatred, jealousy, violence.
(3) To make them calm at heart, because if the heart is at peace, there will be peace at home. This peace will spread in the society, and from society to city, from city to country, from country to world and finally in the whole Universe. 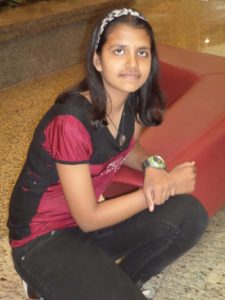 • GHA Ambassador of Peace and Disarmament from Harmony among the World Children.
• Winner of America’s prestigious Skipping Stones Youth Honor Awards for Multicultural International Understanding for the year 2012 – Only girl to receive from the subcontinent and amongst Top 10 children of the World.
• Author of ‘Aatank se Aman Tak’ – Book on World Peace and two other books.
• Education – Studying in 11th Std.

ABOUT AHMEDABAD, INDIA (excerpted from Wikipedia)

Ahmedabad is the largest city and former capital of the western Indian state of Gujarat. It is the administrative headquarters of the Ahmedabad district and the seat of the Gujarat High Court. With a population of more than 5.8 million and an extended population of 6.3 million, it is the fifth-largest city and seventh-largest metropolitan area of India. It is also ranked third in Forbes’ list of fastest growing cities of the decade. Ahmedabad is located on the banks of the River Sabarmati, 30 km (19 mi) from the state capital Gandhinagar.

There has been human occupation in the area since the 11th century, when it was known as Ashaval (or Ashapalli). The Solanki clan established a city, Karnavati, on the banks of the Sabarmati, and their rule lasted until the 13th century. Rule then passed to the Vaghela dynasty of Dholka, then the Delhi Sultanate in the 14th century. In the 15th century, Muzaffar Shah I founded the Muzaffarid dynasty. Karnavati finally came under the control of Sultan Ahmed Shah in 1411 A.D. who renamed the city after himself. Incorporated into the Bombay Presidency during British rule, Ahmedabad remained one of the most important cities in the Gujarat region. The city established itself as the home of a developing textile industry, which earned it the nickname “Manchester of the East”. The city was at the forefront of the Indian independence movement in the first half of the 20th century when Mahatma Gandhi established two ashrams which would become centres of nationalist activities, and was the scene of campaigns of civil disobedience to promote farmers’ and workers’ rights.

Ahmedabad has emerged as an important economic and industrial sector in India. It is the second-largest producer of cotton in India, and its stock exchange is the country’s second oldest. Cricket is a popular sport in Ahmedabad, which houses the 54,000-seater Sardar Patel Stadium.