Welcome to Reverend Buddy Larrier and his colleagues from the Universal Day of Hope Trust who have initiated Bridgetown, Barbados: City of Peace. In 1990, Reverend Larrier was inspired to make a proposal to world leaders for a “Universal Day of Hope” for Truth, Justice, Peace, Healing and Reconciliation. A charitable organization was established and a programme launched for 12th October as the day of hope. A proposal was sent to over 170 world leaders and International organizations. Over the past 24 years the ‘Universal Day of Hope Trust’ has been advocating for world peace. In 2001 a draft resolution for the 12th October as the ‘Universal Day of Hope’ for peace, healing and reconciliation was among the resolutions submitted to the United Nations World Conference against Racism, Racial Discrimination, Xenophobia and Related Intolerance. 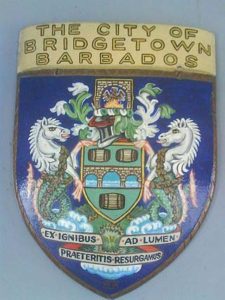 To help positioned Barbados internationally as an island dedicated to truth, justice, peace and advancing the vision of the Caribbean region becoming a zone of peace. 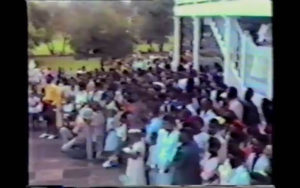 We seek to use Bridgetown as a City of Peace with its UNESCO’s inscription of being a World Heritage City to strengthening the proposal for October 12 to be proclaimed as ‘International Reparations (Repairing the Damage) Day’, for Recognition, Justice and Development with truth and healing for reconciliation.

• Our aim is to help prepare primary school children for adulthood with peaceful minds and hearts;
• Provide stimulating learning environment that validate peace coexistence, knowing and understanding and nurture it.
• To impress on youth the importance of turning away from violence and crime;
• To help men and women respect each other and turn away for domestic violence;
• To impress on parents the importance of teaching their children the value of life;
• To lobby political leaders and governments to pursue policies of a peaceful and humanitarian nature. 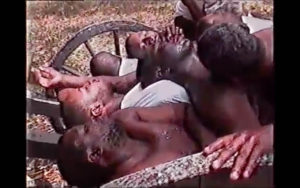 A photo showing the horrors of the Bussa’s Rebellion (14–16 April 1816), whichwas the largest slave revolt in Barbadian history. Several hundred slaves under the leadership of the African-born slave Bussa were defeated by British forces. 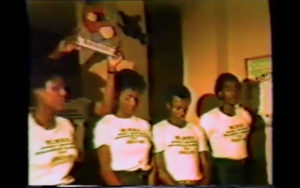 Barbados was colonized by the British in 1625/1627 when a British ship arrived on the island with a crew of Englishmen and 10 Africans that were captured from a rival ship after a battle at sea. Unlike other Caribbean islands Barbados was uninhabited when it was claimed as a British colony. Much evidence existed to prove that people lived on the island prior to the arrival of the British, but it is claimed that none were found on their arrival. This makes Barbados the only colony whereby the colonisers and the colonised arrived together and no blood was shed on the altar for colonization. Barbados is the only colony in the Caribbean that did not began with appropriation from indigenous populations and the infliction of genocide.

The early development of Barbados was by indentured servitude mainly from Ireland and Scotland with some of England’s poor. In 1639 the elite settlers established a parliament of nominated representatives. This means that the island is the third oldest in the Commonwealth of Nations after Britain and Bermuda. It never changed British colonial hands and presently stands as a bastion of independence, peace and democracy in the current era. The island’s size is 166 Sq. Miles (21X14) divided into 11 parishes with four town; Holetown, Speightstown, Oistins and Bridgetown the capital.

It is said “the history of Barbados is by no means barren of events which have materially affected the British Empire. If the navigation laws led to England’s supremacy on the seas, that small island was the cause which led to the navigation laws”. In 1651 ships were sent from England to the island to put down a rebellion. This was the beginning of the modern Royal Navy. To avert disastrous bloodshed the two sides in the dispute reached a compromise and a ‘Peace Charter’ was signed on 11 January 1652. The ‘Barbados Charter’ was a very important document it ensured that the island had internal self-governance. The document subsequently influenced the drafting of the American Constitution 122 years later.

Barbados had a reputation of being a place conducive to good healthy, hence the reason why young George Washington and his ailing brother Lawrence were advised to visit the island in 1750. Barbados is the only country that George Washington ever visited outside of the USA.

In 1816 Barbados had a major rebellion by enslaved Africans many of whom were killed in battle or executed following the battle. This revote contributed to the emancipation of slavery in 1834. At this time the population was 77,000 Africans and 16,000 Europeans. The next rebellion on the island was in 1937. Barbados became an independent nation state on November 30, 1966. Presently the population is approximately 280,000 of which over 90% is of African descent. It has a very high literacy rate of over 95%, one of the highest in the Western Hemisphere. Education is free from primary school through the tertiary. Health Care is also free to citizens from the many polyclinics across the island and the general hospital.

This small island was nick named Little England for it democratic principles, stability and conservatism. In 1994 it hosted the inaugural conference for Small Island Developing States, since then it has initiated a number of significant programmes including the following:

• In 1997 it established a programme to make it easy for nationals living abroad to resettle home and designated August 1 as Emancipation Day;
• In 1998 a Commission for Pan-African Affairs (CPAA) was established, the only such agency of any country. The CPAA was given a mandate to advance to cause for truth, justice, peace and reconciliation of the African family – Diaspora and Continent;
• It is the only known country to have carried out a national consultation on Racism – Report of the Committee for National Reconciliation – A Shared Vision For the 21st Century – December 2000.
• Barbados played a very important role in the 2001 UN’s World Conference against Racism, Racial Discrimination, Xenophobia and Related Intolerance held in Durban, South Africa reaching its landmark consensus; that the transatlantic trade in Africans, slavery and colonialism were all crimes against humanity. It hosted the first follow-up to the Durban conference the Afrikan and Afrikan Descendants World Conference against Racism – October 2002;
• Barbados has lead responsibility for the Caribbean Single Market and Economy process and is also Chair of CARICOM Heads of State Sub-committee on Reparations (Repairing the Damage). 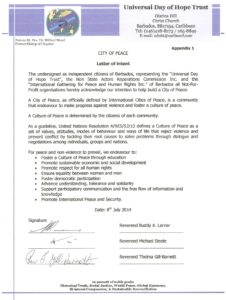 Reverend Buddy Aaron Larrier was born in Barbados an island in the Caribbean on July 2, 1943. He shares this birthday with both his mother and grandmother. Rev. Larrier is the father of seven children – two sons and five daughters and the grandfather of ten – five boys and five girls. He had his early education at the Christ Church Boys’ School. After leaving school at age 15 he pursued his chosen career of tailoring.

In November 1963 he gave up his striving tailoring business and migrated to London as part of the British recruitment programme ‘Your Mother Country Needs You’. He worked with London Transport Board as a Bus Conductor and later a Bus Driver. Like most Caribbean nationals of his generation who migrated to Britain during this period he had a distorted view of history, and like others had to endure human rights violations on a daily basis without fully understanding the issues. In 1977 all this changed when he had a spiritual reawakening (a vision) that altered the direction of his life. The change resulted his detention in a mental hospital under section. 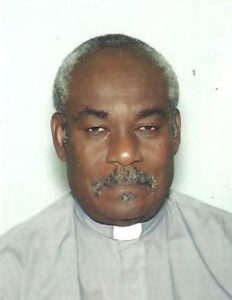 During the 1960s and 1970s many Caribbean nationals human rights were violated through this process via the 1959 Mental Health Act, which came into effect following the 1958 Notting Hill Gate “race riots”. However unlike others who had similar experiences Buddy Larrier challenged the authorities by demanding his release. He became the first known person to have successfully challenged a mental institution in this manner. He became an activist for change and in 1978 started litigations against the health authorities for violating his human rights. His case sparked national debate on mental health and racism and contributed significantly to the 1959 Mental Health Act being revised. He is still in pursuit of justice after 37 years.

Rev. Larrier is a resolute Human Rights Advocate and a Pan-Africanist specialising in racism and mental health. In 1988 he was honoured with the Caribbean Times Community Award. The Rt. Rev. Dr. Wilfred Wood a fellow Barbadian and former Bishop of Croydon, once said of Buddy “neither the misreading of his action, the misdiagnosis of his condition, nor the lack of comprehension of his religious conviction on the part of others was not able to deter him from following what he believed was a call from God”.

His vision of 1977 became his life’s mission – the pursuit of truth, justice, peace and unity for the African family and ultimately the world. In 1990 he founded the ‘Universal Day of Hope Trust’ with the mission to promote October 12 to be observed as a Universal Day of Hope for Truth, Justice, Peace. In 1994 he was imprisoned for his activism. In 1998 he was among the architects and first staff members of the Government of Barbados Commission for Pan-African Affairs (CPAA). The CPAA has a mandate to help unite African people globally. He is a member of the government’s Reparations Task Force established on October 12, 2012 and a co-founder of the Non State Actors Reparations Commission Inc. a coalition of Human Rights and Social Justice Organisations established October 12, 2013.

ABOUT BRIDGETOWN, BARBADOS (from Wikipedia)

The Bridgetown port, found along Carlisle Bay (at 13.106°N 59.632°W) lies on the southwestern coast of the island. Parts of the Greater Bridgetown area (as roughly defined by the Ring Road Bypass or more commonly known as the ABC Highway), sit close to the borders of the neighbouring parishes Christ Church and St. James. The Grantley Adams International Airport for Barbados, is located 16 kilometres (9.9 mi) southeast of Bridgetown city centre, and has daily flights to major cities in the United Kingdom, United States, Canada and the Caribbean. While there is no longer local municipal government, it is governed as a political constituency within the national Parliament. During the short lived 1950s-1960s Federation of the British West Indian Territories, Bridgetown was one of three capital cities within the region being considered to be the Federal capital of region.

The present day location of the city was established by English settlers in 1628 following a prior settlement under the authority of Sir William Courten at St. James Town. Bridgetown is a major West Indies tourist destination, and the city acts as an important financial, informatics, convention centre, and cruise ship port of call in the Caribbean region. On 25 June 2011, Historic Bridgetown and its Garrison were added as a World Heritage Site of UNESCO.