We welcome Mrs. AWACANG’O Justine Felicitee and her colleagues Mr. JUVENAL Muhindo Machozi and coordinator Mr. KATALIKO James as leaders of International Cities of Peace. Through their work and organization, they have established Butembo, D.R. Congo as a City of Peace. Their organization, Kijiji Cha Amani, literally means “Village of Peace” in their language. 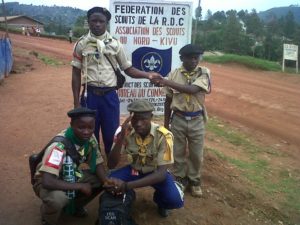 AREA OF ACTION
Article 2: The operating area of Kijiji Cha Amani is the African Great Lakes sub region. Its registered office is located in Butembo city, and may be transferred to any other place in the Democratic Republic of Congo by decision of the General Assembly. 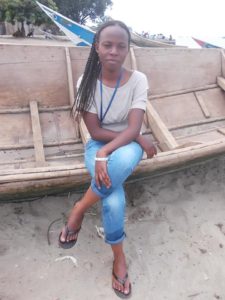 Section 4: Kijiji Cha Amani is established for an indefinite period of
time from signature 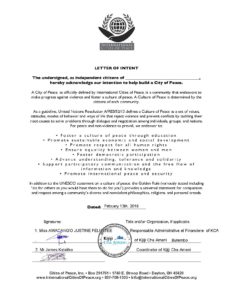 Letter of Intent for Butembo with signatures of Leaders

“In the year 2003, Ituri was plunged into a tribal war
between the Lendu and Hema tribes. This war was the source of many
human rights violations. At that time I was a 12-year-old girl, and my little
sisters, my older sisters and brothers and my parents ran out of food,
clothing, and medical care. 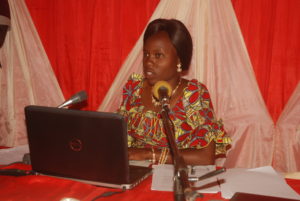 “We spent nights in the bush; other times at home and all together on the floor as the mattress and sheets were looted. We even stopped studying. After a while the violence became intense, the men were tortured, the women were raped and the children were whipped. The two tribes broke in with machetes and set fire to the houses. My parents had decided to flee with us to Uganda where we spent a year in a refugee camp without studying.

“This long moment of war hurt us both morally and physically and taught me that “Peace is the source of all good life”. I joined the Living Youth group, as a ‘Future Leader’, we made Peace Theaters, Peace Debates, and Peace and HIV / AIDS training. My teenage life I was in this group but also in the Scout group.

“Having arrived at the university level in Butembo for five years now, I was a member of the human rights NGO called International Training Network in Human Rights and Assistance to Girl with Children (RFIDH) where I was in charge of animating the “Peace and Sexual Violence in Universities”, then member of UREPORT-Unieleze with my Peace Club as Community and now Financial Administrative Manager of Kijiji Cha Amani in Butembo. All of these groups I have joined because they are based on peace and the denunciation of the evils that eat away at our country and my current city. We will know Butembo, a better city if we commit positively.

“Here is the purpose of my commitment to Peace. ‘MY LIFE WILL BE BETTER, IF IS ONLY IF I HAVE PEACE'”

ABOUT BUTEMBO, D.R. CONGO (from Wikipedia)

Butembo is a city in North Kivu, in the north eastern Democratic Republic of Congo, lying west of the Virunga National Park. The city is an important commercial centre with large markets, a cathedral, multiple large hospitals, and an airport. The city is located in a region known for tea and coffee growing. As of 2013 it had an estimated population of 670,285, making it the second largest city in North Kivu.

In 2006 Hotel de Butembo was finished. An expensive hotel when compared to the living standards, but a very safe place to stay for foreigners. As of 2007, Butembo (and surroundings) can be seen in detail in Google Maps.

Butembo is 90% populated by the Nande tribe,[4] a tribe fueled by ethnic solidarity, conservative moral standards and influential leaders.