Welcome to Mohamed Sheriff and colleagues from Students/Pupils Forum for Peace and Development who have created a city of peace initiative in Eastern Freetown, Sierra Leone. Their motto is “”Changing Our Attitudes for a Brighter Future”! 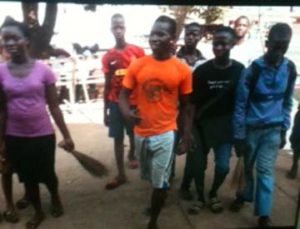 AN OVERVIEW
The Students /Pupils Forum for Peace and Development is a non political, campus based Peace organization formed to serve as AMBASSADORS OF PEACE in learning institutions.
It is a school/campus based violent prevention organization created in respond to the high level of antisocial behavior and school/campus disorder or violent orchestrated especially during school activities. Development in educational issues and other relevant issues towards national development are also among the numerous reasons for the formation of the organization.
As Ambassadors of peace, we serve as school/campus based peace activists focusing on changing the behaviors and attitudes of students/pupils that will influence the nation and its development.
Illegal acts of behavior, student’s aggression, and drug abuse, deviance of authorities, lawlessness, and direct confrontation with police and students vandalism are becoming epidemic in learning institutions. 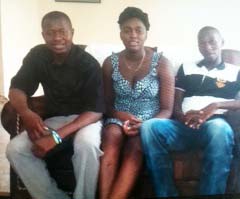 The drastic and punitive methods often taken by school authorities and the reactive measure used by police in curbing antisocial behavior have not brought an end to it neither has it brought a good image in the mind of citizens.
Therefore, instituting a school/campus based peer leaders who would serve proactively as school/campus based partnership in violent or crime prevention in school or on campus can help prevent these antisocial acts.
The students/pupils Forum for Peace and Development [Peace Ambassadors] would target primary, secondary and tertiary institutions nationally.
Creating a national peace ambassadors group for students/pupils in learning institutions would help compliment the effort of school authorities, the police and even the government in minimizing if not eradicating violent acts especially during school or campus activities.

Letter of Intent with Signatures 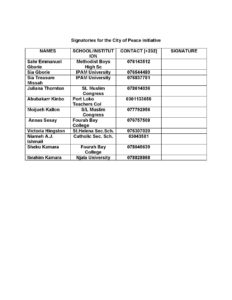 MISSION:
The mission statement is to create student unionism in which the mind and soul of every students/pupils is fully prepared to be respecter of the law.

GOAL
• Our aim is to have violent free students/pupils and their mind set on issue of national development.

OUR OBJECTIVES
• To promote the teachings of civic right and responsibilities
• To promote gender issues by working with advocacy organisations
• To promote the rule of law, fundamental human right, social justice, constitutional and democratic rule values in Sierra as fundamental requirement for good governance.
• To establish and develop link with other organisation and society towards developmental issue
• To promote tolerance between schooling going pupils/students
• To promote national unity, mutual understanding, tolerance and respect across ethnic and religious divide amongst the people of Sierra Leone.

• To institute school/university based violent prevention method
• To create school/university based partnership in crime prevention
• To have a formidable peace ambassador clubs in all learning institutions across the nation with interconnectivity of students/pupils unionism
• To have peer leaders who would provide peer group intervention in reducing the risk of delinquent behaviors and fast track development.
• To reduce early childhood aggression
• To reduce fear in school activities like sports, inter school matches
• To institute proactive and preventive approach to school/campus based violence and vandalism.
• To prevent school failure, drug abuse and delinquency among school children
• To reduce the incident of adolescent problems through preventive intervention
• To foster the spirit of understanding and appreciating diversity among students
• To promote political tolerance among students
• To legally and lawfully pursue students’ problems
• To prevent students/pupils taking the laws into their hands
• To create nationalistic spirit and developmentally oriented society
• To prevent students/pupils direct confrontation with law enforcing agencies like the police etc

Necessity for action shall arise in the following circumstances:

• Violent acts, unlawful conducts and so on
• Disobedience to authorities with an aim of creating chaos
• Damage to any public property
• Fighting, violent or destructive protest/strike as oppose to peaceful one
• Any action taken or ought to be taken which serves as a recipe for chaos
SOURCE OF FUNDING
• Individual or group contributions
• Donation by individuals, N.G.O’s, C.B.O’s and Government agencies and so on
• Bobby/ voluntary jobs like environmental sanitation/ cleaning
• Project proposals etc 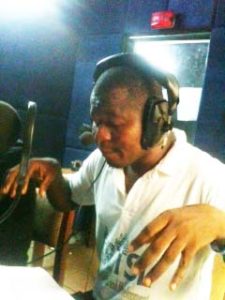 • FROM 2009 TO 2011 GOT DPLOMA IN MASS COMMUNICATION AT THE UNIVERSITY OF SIERRA LEONE, FOURAH BAY COLLEGE
ON 20TH JULY, 2011, AWARDED CERTIFICATE IN BUSINESS PRINCIPLES FROM THE SIGIAY GROUP OF COMPANY
• ON 22ND MAY 2013, AWARDED CERTIFICATE ON FINANCIAL MANAGEMENT AND RECORD KEEPING BY THE USAID, BLUE STAR HEALTH CARE NETWORK AND MARIE STOPES INTERNATIONAL 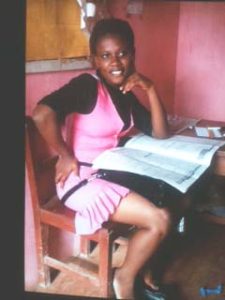 ABOUT FREETOWN, SIERRA LEONE (from Wikipedia)