Welcome to Mr. BASHIKIRE Théophilea and his colleagues who have created Gitega, Burundi: City of Peace. The group formed the Hope Center, which is an organization dedicated to peacebuilding in their community. Gitega is the second administrative and economic city of Burundi with about 200,000 inhabitants. The town is located in the country’s center and has seen horrible massacres. The population is poor and unemployment is high.

Burundi is a country of 27,824 km2 in Central Africa.
It is bounded on the East and South by Tanzania, to the North by the Rwanda and to the West by the Democratic Republic of Congo. Its population is 10,163,000 inhabitants divided into three ethnic groups: Hutu 86%, 13% Tutsi, Twa 1%.
Burundi is a Republic and has a violent history. It was colonized by Belgium until 1962 where it gained independence. In 1961 the Hero of the independence Prince Louis Rwagasore was assassinated; this is born of disorder that lead to killings of Hutu elites (1965).
In 1966 the Tutsi army took power and abolished the kingdom (also led by Tutsi).
In 1972, taking advantage of a Hutu revolt, the Tutsis army massacred over 200,000 Hutu and over 400 000 take the path of exile.
In 1988, another Hutu revolt in Ntega and Marangara, brings the army to turn it off in the blood.
In 1993, the democratically elected Hutu president ( NDADAYE Melchior) was assassinated by the Tutsi. Hutu Rebellions led guerrillas until 2004 when peace agreements were signed.
The 2005 elections were won by President Nkurunziza (a former head of the rebel movement). But the country is target killings, repetitive violence, gangs, bad governance, imprisonment of opponents, disrespect of human rights. Meanwhile misery has widespread, impoverishment of the people is immense. 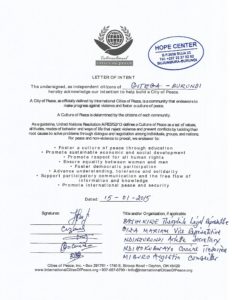 To this situation in Burundi, Hope Center is committed to combat these evils and seek the welfare of populations. Some equity assets of the Hope Center are:

– Supervision of 50 women vulnerable to petty trade
– 25 street children are welcomed every Monday for advice, praise and light meal
– Youth Training of Trainers (47 representing the country) on human rights.

Hope Center is an organization of Burundian rights created in 2013 at Gitega to promote peace and human rights for populations well being. 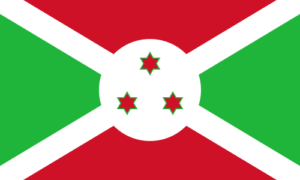 Hope Center is an organization of Burundian rights created in 2013 at Gitega to promote peace and human rights for populations well being.
Its objectives are:

OBJECTIVES OF THE HOPE CENTER

Mr. Bashikire is 44 years old. He holds a Degree in Languages and Literatures of African as well as a Degree in Theolog. He is also a Professor at the College of Islamic Kabondo. 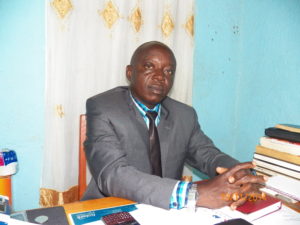 ABOUT GITEGA, BURUNDI (excerpted from Wikipedia)

Burundi /bəˈrʊndɨ/ or /bəˈrʌndi/, officially the Republic of Burundi (Kirundi: Republika y’Uburundi, [buˈɾundi]; French: République du Burundi, [buʁunˈdi] or [byʁynˈdi]), is a landlocked country in the African Great Lakes region of Southeast Africa, bordered by Rwanda to the north, Tanzania to the east and south, and the Democratic Republic of the Congo to the west. It is also sometimes considered part of Central Africa. Burundi’s capital is Bujumbura. Although the country is landlocked, much of the southwestern border is adjacent to Lake Tanganyika.

Gitega is the capital of Gitega Province, one of the 17 provinces of Burundi. It is the home of the Burundi National Museum and the Archdiocese of Gitega. Several karyenda royal drum sanctuaries are located in the area, as well as the ibwami (royal court).