A peace conference held in Hazara a month after it was established as an International City of Peace.

We welcome Nazakat Hasrat and his colleagues who have established Hazara, Pakistan as an International City of Peace. Peaceful Pakistan is a community based initiative, launched with a mission to build a peaceful, secure and united Pakistan. Peaceful Pakistan is delivering its message of peace through social media, web and on ground activities. Nazakat is the MasterPeace Pakistan Hazara Coordinator.

An interfaith meeting in Kelash Kumar master peace, part of the “Religious Freedom & Visit of Worship Places of Minorities” initiative. Participants included among others: Alama Eshan of Interfaith Peace, Aysha of MasterPeace, Nazakat Hasrat and Kelash Kumar of International Cities of Peace, and Basha from Danmark. 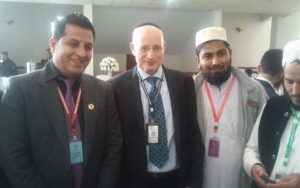 The social media and on-ground activities of Peaceful Pakistan are presented in the form of posts, tweets, and videos. The website of Peaceful Pakistan is an archive of Pakistan’s most outstanding achievements, which is delivered through news, videos and pictorial gallery. The website also includes motivational blogs and articles that emphasize on the need of peaceful coexistence and national unity. 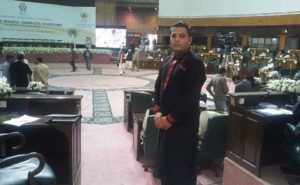 Peace and Social Harmony
Pakistan is a culturally, racially, linguistically and religious heterogeneous country. For a prosperous and peaceful society it is indispensible to create harmonious modus vivindi for cultures and denominations who inhabit the variegated cultural tapestry of Pakistan. Realising the importance of social harmony in a multi-cultural society SPO has embarked upon a programme of “Peace and Social Harmony”. 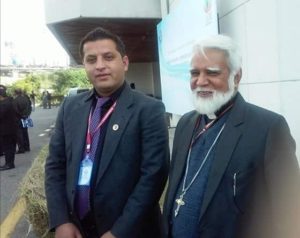 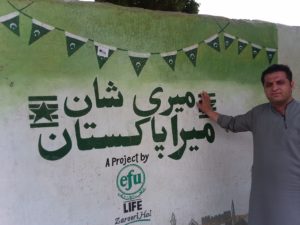 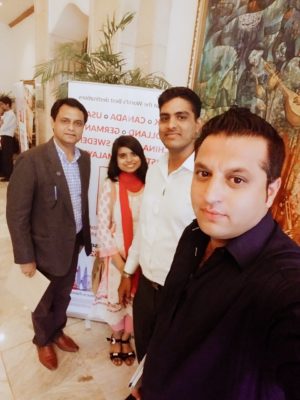 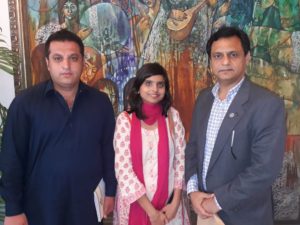 The Peace and Social Harmony Programme encourages civil society networks, faith-based organisations and groups, representing a wide range of stakeholders, to jointly participate in decision-making processes for the protection of basic rights irrespective of religious, language, ethnicity and class differences.

The programme is based on building social harmony among diverse groups to share and understand each other’s point of view and respect differences. Major challenges include the rising sectarian differences and inter-provincial harmony. ‘Politics of Consent’ will be encouraged resulting in informed, thoroughly debated, and positive public and policy messages of awareness raising and advocacy. 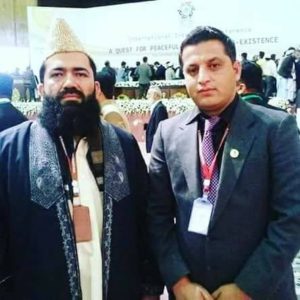 The programme has been divided into 3 major components with activities. It aims to build capacity and empower civil society networks and communities around social harmony and peace with a focus on restoring social harmony and building a culture of peace and participation, and partnering with all local stakeholders in the development process. At policy level the activities of programme are operationalised by various means including knowledge generation through policy analysis, creation of data and information basis; policy awareness raising through, dialogues, networking, information dissemination and mobilising support of the civil society; and policy influencing at local, regional and national, levels by involving policy makers in the dialogue process and by contributing to preparation of national policy documents.

The MasterPeace Pakistan Hazara Coordinator’s strategy for the promotion and defence of rights of minorities and fostering cooperation on issues related to peace and social harmony is to build linkages with other civil society networks. To disseminate the knowledge about human rights and develop supportive environment for its goals, SPO contributes to knowledge production in the discourse of rights based development, which includes policy papers, books, publications, short films, broadcasts and website entries. These multiple interventions at various tiers of society will prove conducive in achieving “improved social harmony and consensus on local and national issues among different segments of society for securing their rights regardless of caste, creed, colour or sex.”

The MasterPeace Pakistan Hazara Coordinator strives to empower marginalized communities through its activities and interventions across Pakistan. To appreciate the struggle of women, men and communities in bringing about change in their lives and communities, SPO regularly compiles and publishes their stories in the shape of case studies. These stories do not represent an overall view of the situation but they definitely represent snippets of the bigger picture.

Researchers have observed that physically active children are less likely to suffer from highblood pressure, diabetes, obesity and heart diseases, later in life. The experts were speaking at an event celebrating the International Day of Sports for Development and Peace (IDSDP) organised by “Right-to-Play” in collaboration with the United Nations Information Center and Sports Development Foundation, at a local hotel on Monday. They observed that physical activity stimulated growth and helped individuals achieve improved
physical and emotional health. 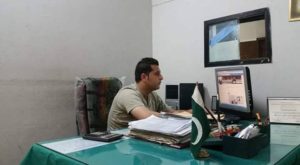 Researchers have observed that not only physical activity helps one lead an active life but that active children are less likely to suffer from high blood pressure, diabetes, obesity and heart disease later in life. “We are working with over 600 schools to promote the idea of making children learn through games and similar activities,” said Iqbal Jatoi, country manager Right-to-Play, Pakistan. He said that children from different socio-economic classes, race and creed came together through such activities. 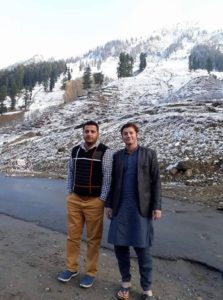 Panel discussions were held at the event on the role that physical activity plays in quality education, social cohesion as well as women empowerment and development. In his opening speech, Federal Education and Professional Training Minister of State Balighur Rehman said that they were working on devising a policy to place sports in the National Education Policy this year.

United Nations Information Centre Director Vittorio Cammarota said that sports nurtured a society and incorporated fundamental values such as equality and mutual respect. It further motivates children to look forward to school, he said. Majid Khan, former captain of the national cricket team, said, “Before the 1970s, all government and missionary schools had playgrounds for all kinds of sports.” Private schools started mushrooming during the early 1980s and are unable to provide children with a suitable space to play, he added. 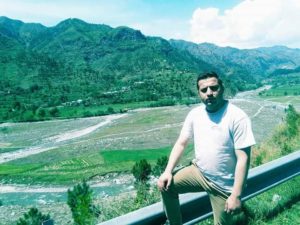 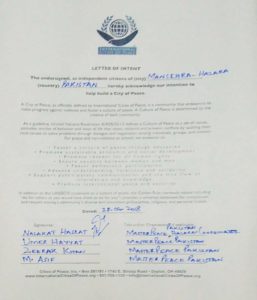 Nazakat Hasrat was born in Hazara Kpk Maneshra in April 1988 and started his career as an businessman and also in working for Peace. 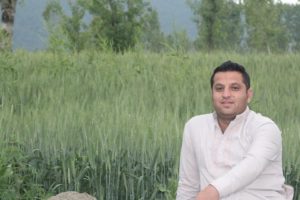 Nazakat lives in First Province in Pakistan, which is Khaber Pakhtunkhwa and the district name is Maneshra. His village Dhodial Hazara, which is 300 km from Islamabad.

He has B.A  in economic Ajk university.  He also accomplished level 4 and level 5 in the ABE board, United Kingdom since 2013. 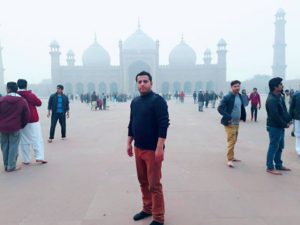 Nazakat Hasrat is the MasterPeace Pakistan Hazara Coordinator. He covered a very large area of  Khyber Pakhtunkhwa, it is one of the four administrative provinces of Pakistan, located in the northwestern region of the country along the international border with Afghanistan total area  74,521 km² in which  27 Districts.
According to city of peace leader Kelash Kumar, “Nazakat is the most energetic and bold coordinator of our club and worked in the most dangerous province of Pakistan and last year 2017,  Mr. Nazakat and I were received killing threats in writing, while doing peace activities in the temple of Hindu community in Chitti Gitti town. Nazakat Hasrat is among the one “Ambassador of Peace” in Pakistan  who played a vital role for propagating the awareness of peace, interfaith and harmony on the grassroots level in their region since 2010 in schools, madrassahs, and universities.”

ABOUT HAZARA, PAKISTAN (from Wikipedia)
Hazara is a region in the North-Eastern part of the Khyber Pakhtunkhwa province of Pakistan. It is located east of the Indus River and comprises seven districts: Abbottabad, Battagram, Haripur, Mansehra, Upper Kohistan, Lower Kohistan, and Torghar.
Khyber Pakhtunkhwa is one of the four administrative provinces of Pakistan, located in the northwestern region of the country along the international border with Afghanistan. It was previously known as the North-West Frontier Province (NWFP) until 2010, and is known colloquially by various other names. Khyber Pakhtunkhwa is the third-largest province of Pakistan by the size of both population and economy, though it is geographically the smallest of four.[3] Within Pakistan, Khyber Pakhtunkhwa shares a border with Punjab, Balochistan, Azad Kashmir, Gilgit-Baltistan, and Islamabad. It comprises 10.5% of Pakistan’s economy, and is home to 11.9% of Pakistan’s total population, with the majority of the province’s inhabitants being Pashtuns. The province is the site of the ancient kingdom Gandhara, including the ruins of its capital Pushkalavati near modern-day Charsadda. Originally a stronghold of Buddhism, the history of the region was characterized by frequent invasions under various Empires due to its geographical proximity to the Khyber Pass. 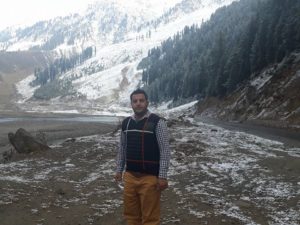 During British rule, the region of Hazara had formed part of Punjab province, until the western parts of that province were separated to form the new NWFP. The areas around Abbottabad and Mansehra became the Hazara District of Peshawar Division, whilst areas to the north of this became the Hazara Tribal Agency. Sandwiched between Hazara Tribal Agency and Hazara District were the small princely states of Amb and Phulra. This system of administration continued until 1950, when these two small states were incorporated into the Hazara district.
Note: If information or photos used here are copyrighted, please contact us and we will immediately delete the copyrighted material.