We welcome Chelvin Ramsamy and the citizens of L’Escalier, the first City of Peace in Mauritius. Chelvin is a young peacemaker with global connections and a firm commitment, along with his family and friends, to fostering a culture of peace in this island community.

Note: Introduction page with information primarily at the time of joining International Cities of Peace. For updates, please contact the liais

We envision building resilience by cultivating a culture of tolerance, inclusivity, interfaith harmony, co-existence, love and social peace-building across the border. We believe that this is possible by organising peace camps in LEscalier in educational institutions and interactive sessions as well as peace talks with society stakeholders, diplomats and ambassadors, UN officials, religious scholars, and community-based groups/organizations. The engagement of these individuals is crucial to cultivating this culture of tolerance, inclusivity, and co-existence in L’Escalier. 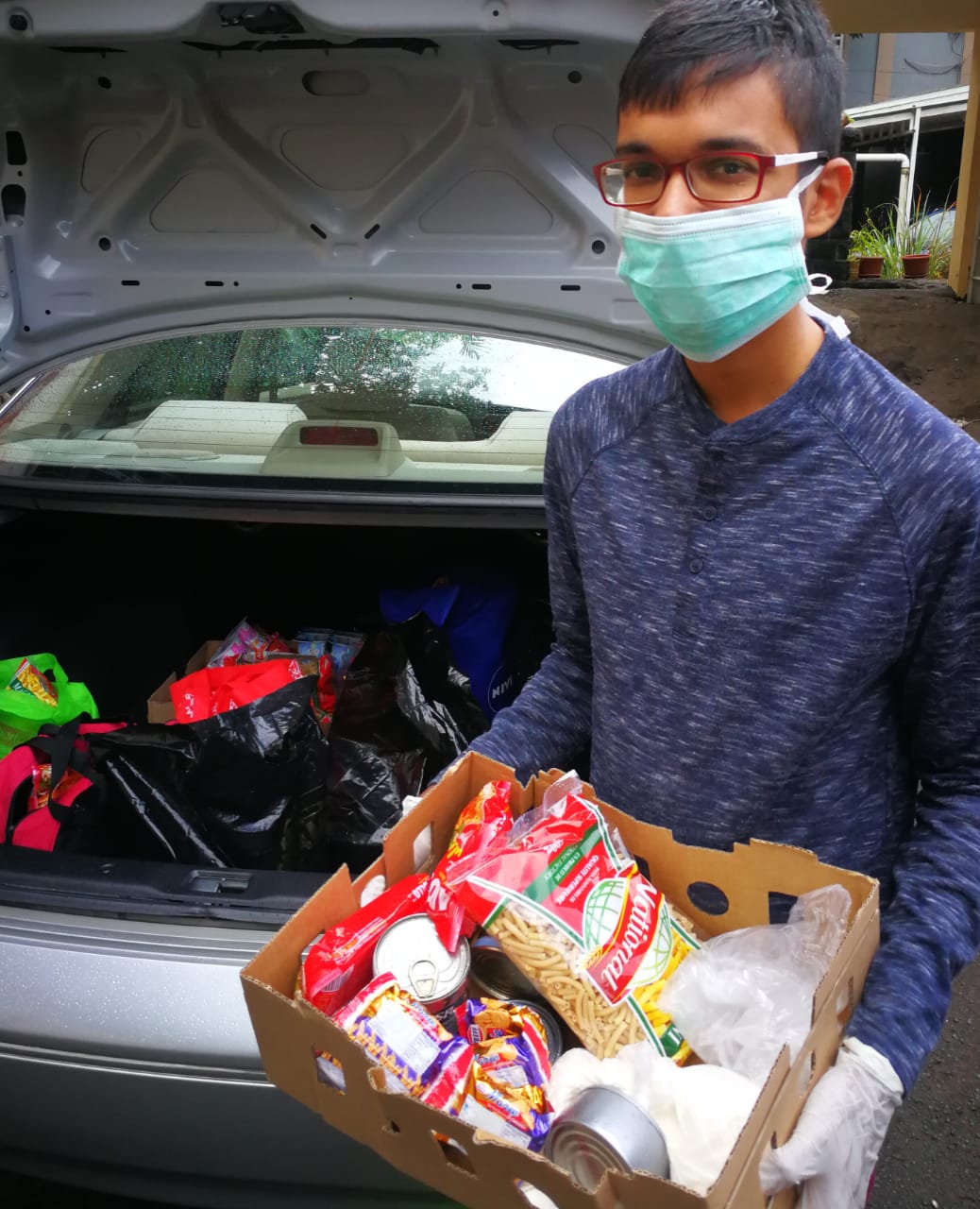 Chelvin Ramsamy with a food pack to distribute to needy families during the Covid-19 time in L’Escalier Village.

Our goal is to provide equal opportunities to all in L’Escalier including youth and women to bring solutions for peaceful and inclusive world by visiting any community school, college, university, cultural, religious institutions and deliver a short motivational lecture on importance of peace and coexistence. 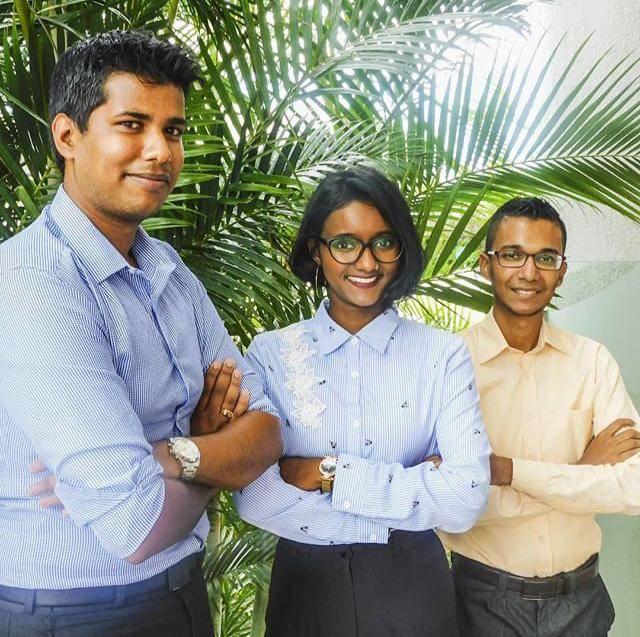 Mostly importantly, we seek to encourage all to endorse that terrorism and violence has nothing to do with any caste, race, ethnicity, religion. 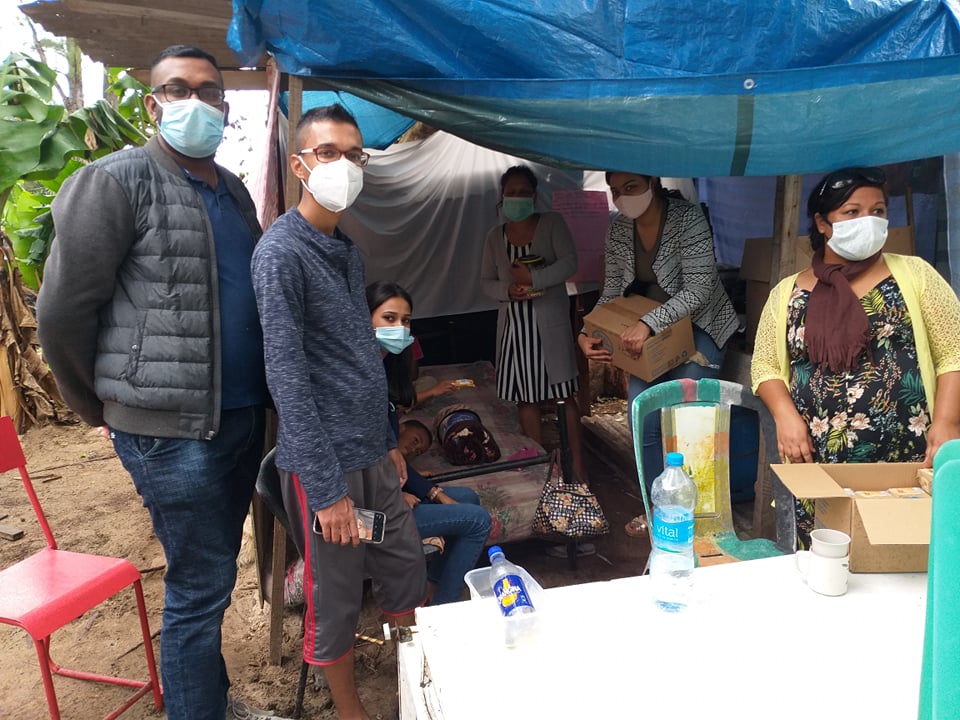 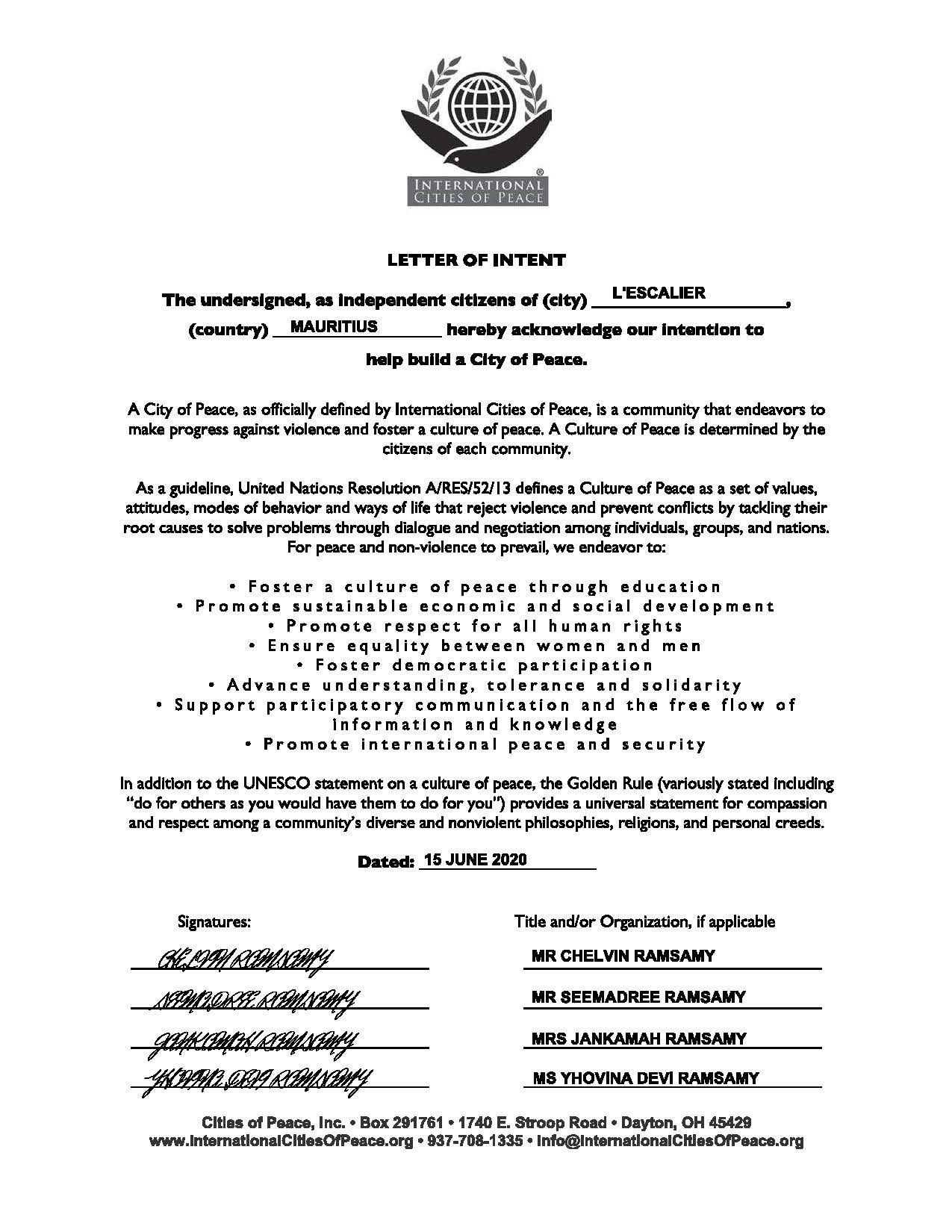 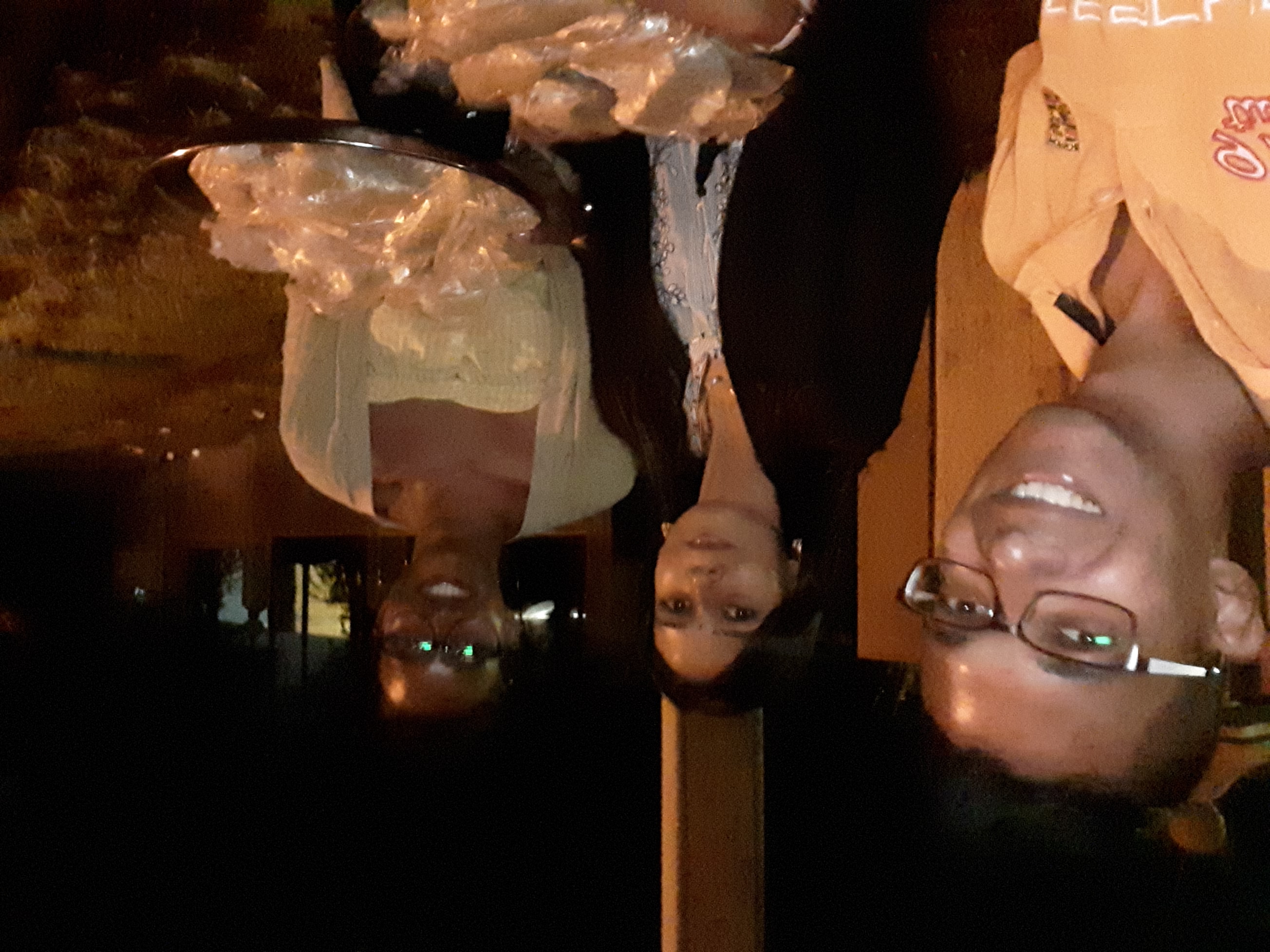 L’Escalier International City of Peace held its first meeting with all relevant stakeholders on Tuesday 28 July 2020 at the L’Escalier Social Welfare Centre including: Police, Hospital Directors, Post Masters, HeadMasters of Schools, Leaders of Social Cultural Groups, CEOs, District Council representatives and fellow citizens. On this occasion, there was the official unveiling of the distinction of L’Escalier International City of Peace. 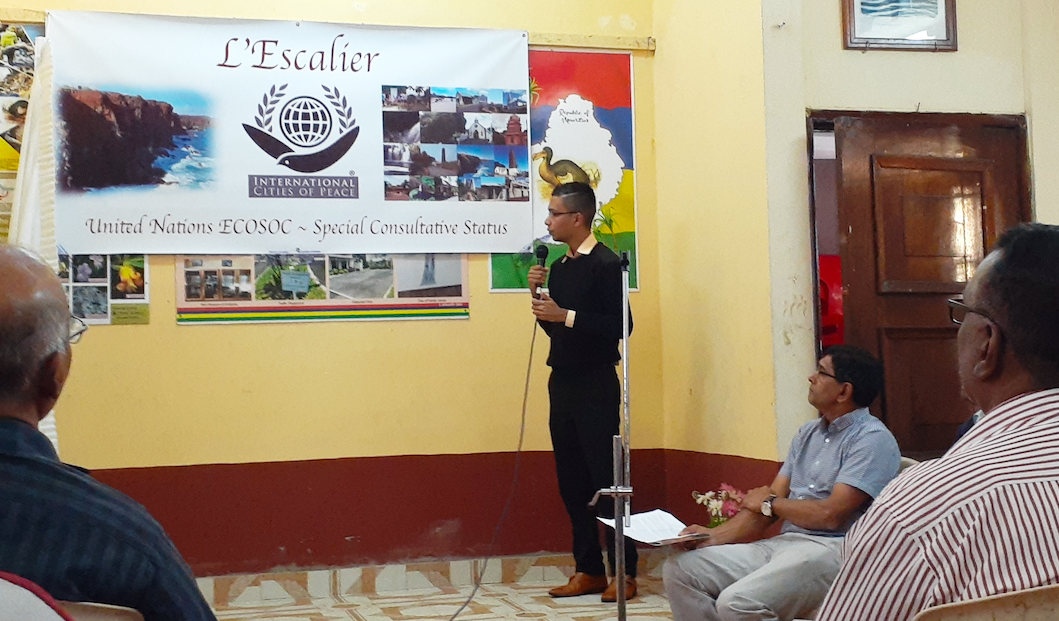 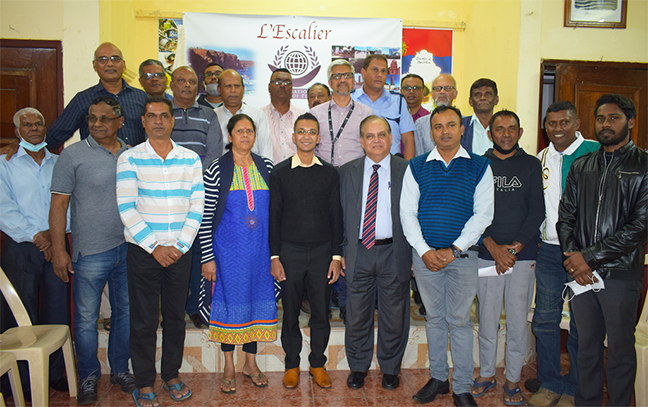 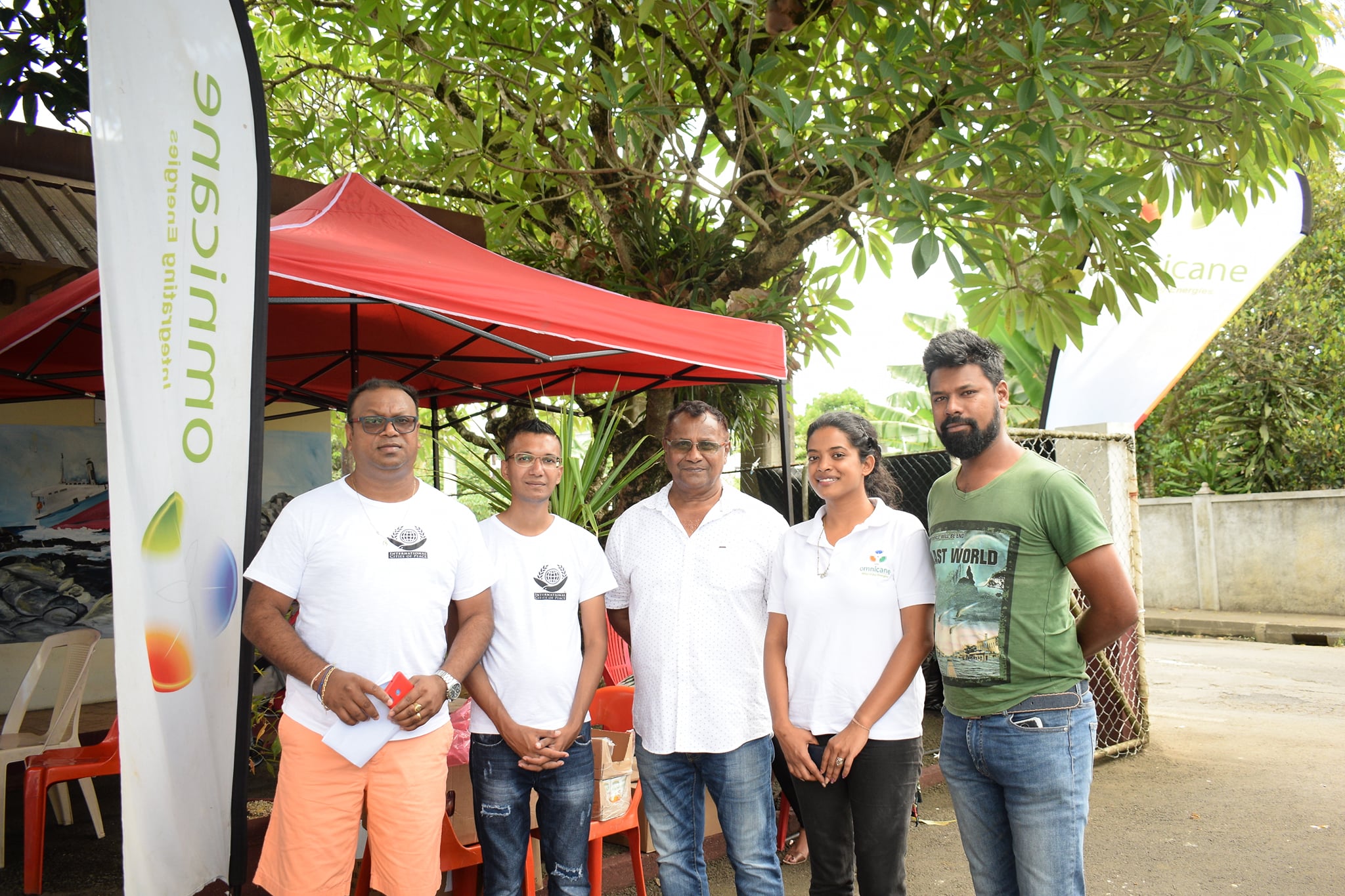 The following are the latest examples of activities held during 2020 and 2021 in L’Escalier: International City of Peace. The activities were organized by International City of Peace Liaison Chelvin Ramsamy who serves as the single point of contact between the Association and L’Escalier. This page is updated once a year to include community peacebuilding  throughout Mauritius.

– Symposium on the environmental, health and economic impacts of the global pandemic

– 100 youth attended coming from various regions of the island

– Refreshments for participants was sponsored by Omnicane Foundation

– Ceremony organised to celebrate the International Day of Peace including a Peace march, cultural programs and an interfaith prayer

– Distributing 200 plants for free to the inhabitants upon donation from the Ministry of Environment.

– Objective was to encourage people to plant trees.

– 200 inhabitants of all ages of L’Escalier benefitted.

-In view of the annual celebration of Divali, participants were encouraged to bring colour and rice, and draw the traditional indian Rangoli.

– The then Director of the Indira Gandhi Centre for Indian Culture also delivered a free workshop on the benefits of practicing yoga.

– Participants were finally encouraged to bring and share sweets in view of the festival.

– A total of 100 participants. including over 50 youths. were noted. 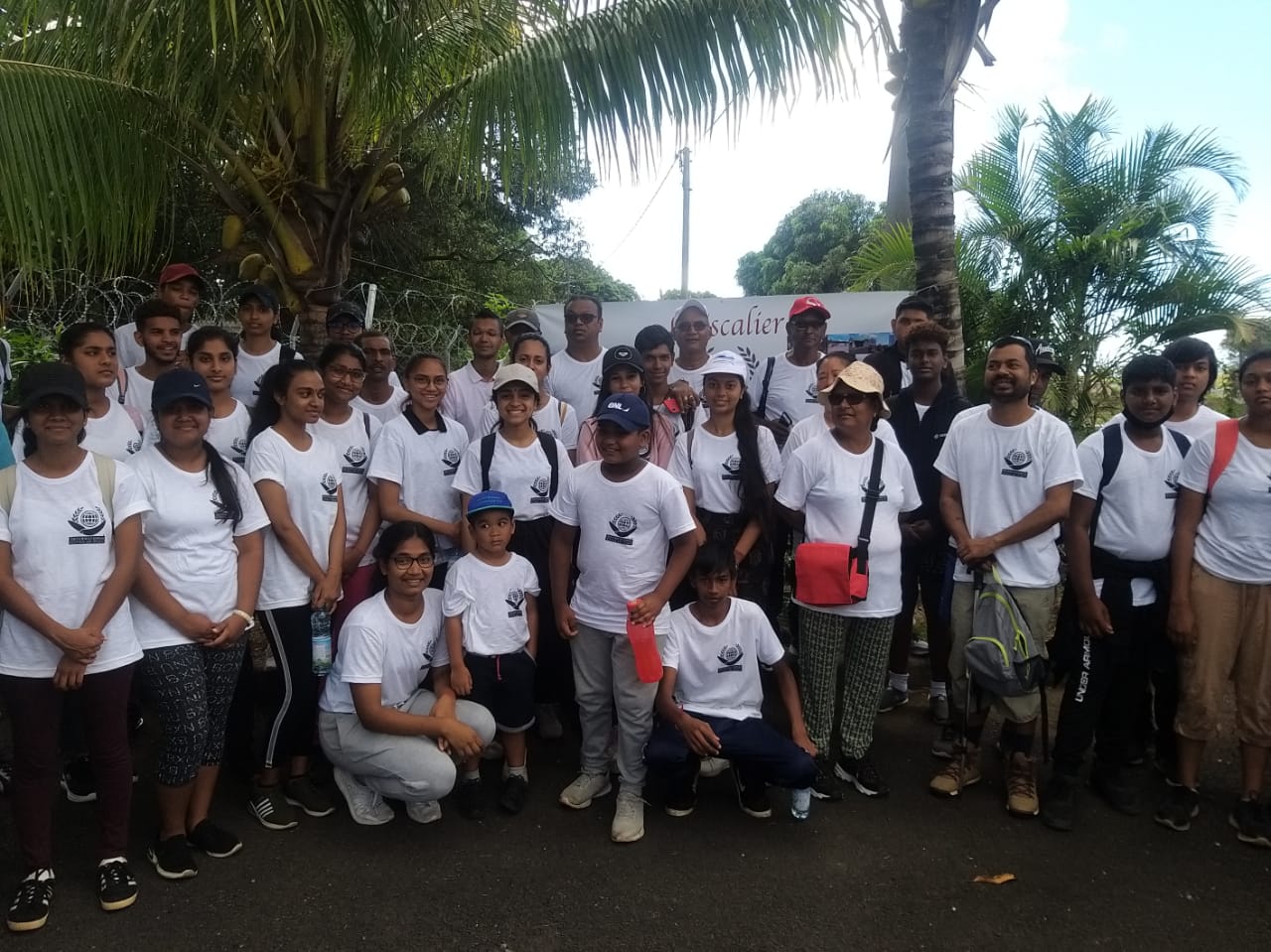 – The event culminated in a youth workshop at Savinniah

– Venue: Apartment of ENL, obtained free of charge from ENL

– A total of 110 participants. including around 90 youths. were noted.

– Lunch & transport (from L’Escalier to Le Bouchon & Savinniah to L’Escalier) were sponsored by Omnicane Foundation & Let’s Glow Organisation (around Rs 7,500) 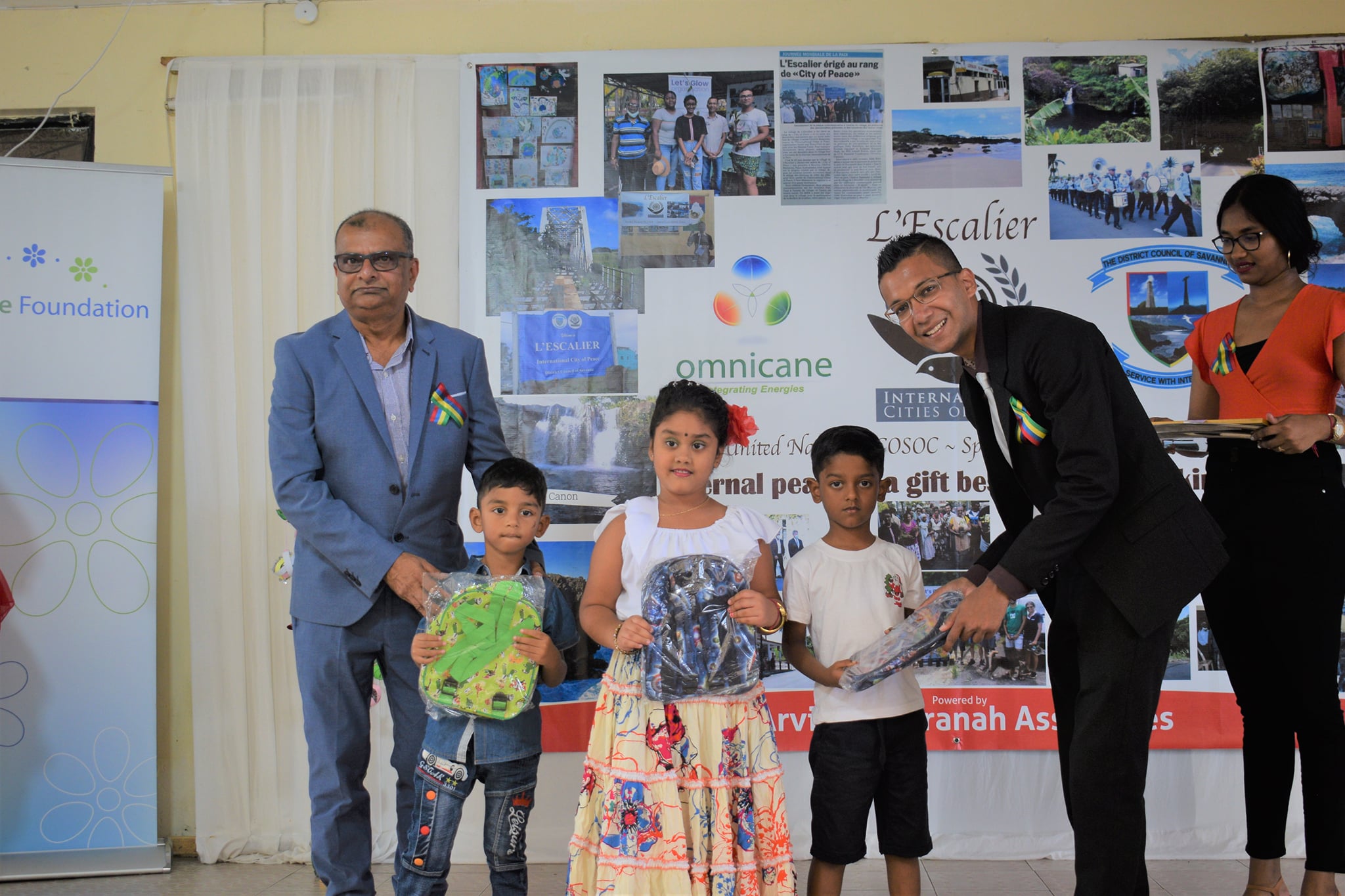 – Around 300 participants were noted (parents & children). 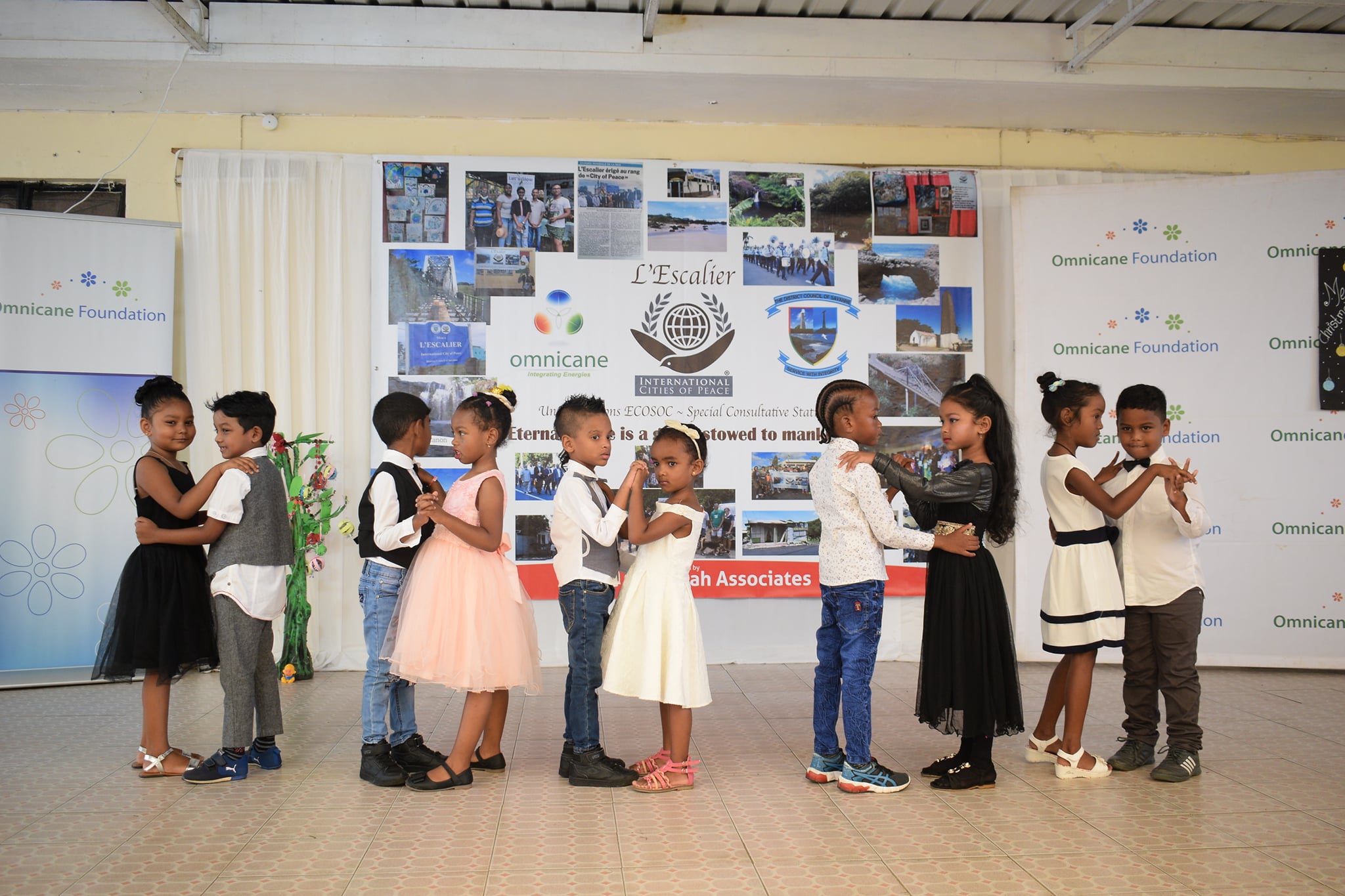 – Secondary school and tertiary students of L’Escalier & Trois Boutiques were encouraged to present different programmes including songs, dance & sketch to entertain the residents of the residential home

– Around 250 participants in total

– No cost as token bag (fruit, juice, t-shirt) was sponsored by Mauritius Blood Association and venue (Social Welfare Centre) is free of charge 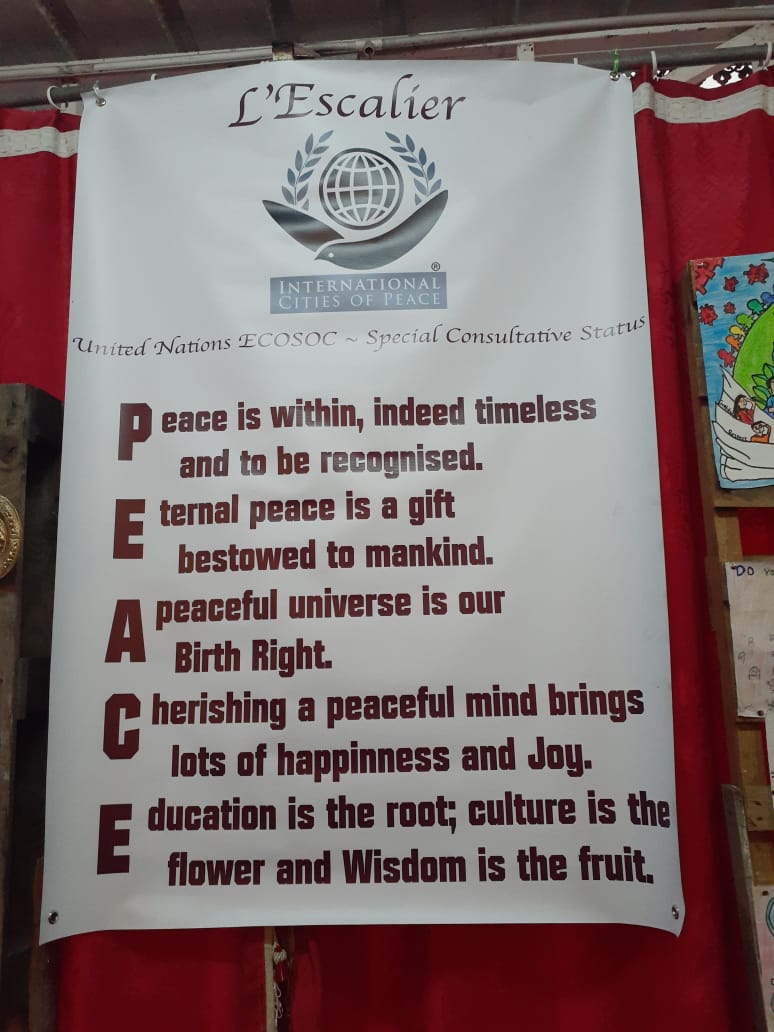 – Session organised via StreamYard and displayed live on Facebook 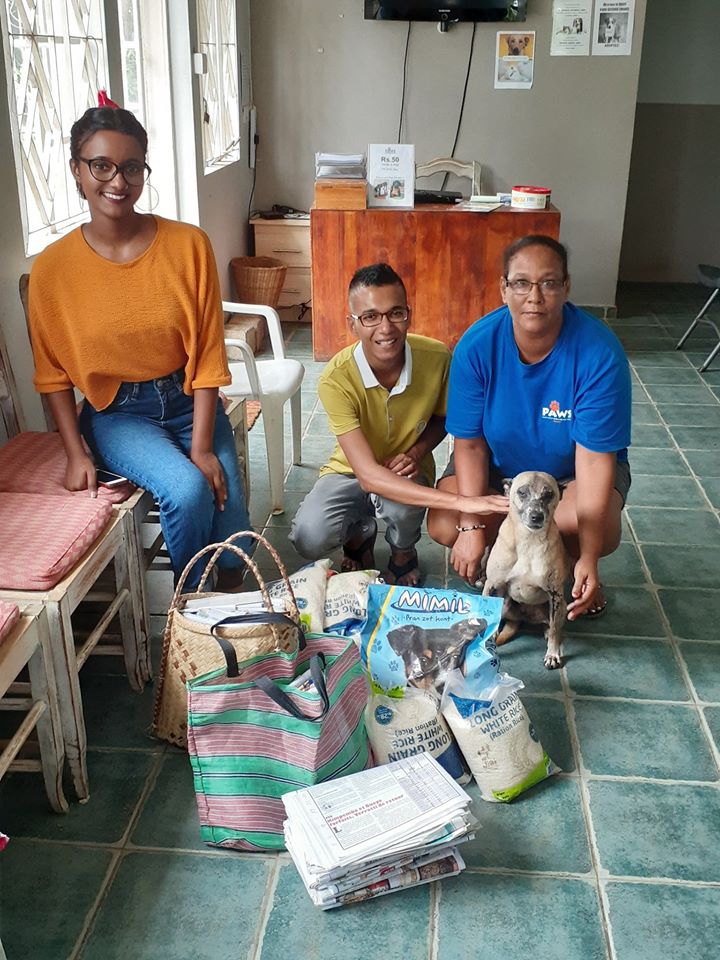 An alumnus of President Obama’s YALI with a First-Class Bachelor of Laws and Master of Laws (LLM) International Business Law from Middlesex University London, Chelvin is recipient of the Most Outstanding Student Award, Postgraduate Alumni Scholarship and UNICAF Scholarship. Hitherto, he was University of Cambridge A-Level Scholarship Ranked Candidate. 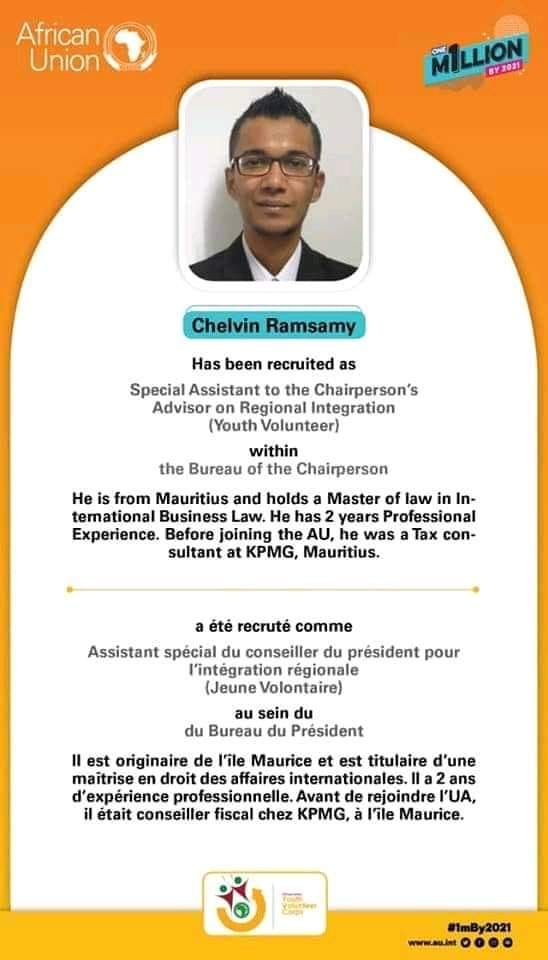 As a leader of tomorrow, Chelvin is a leader of today who has the responsibility to cultivate a culture of tolerance, inclusivity, interfaith, harmony, co-existence, love and peace in my home village of L’Escalier on the island of Mauritius, African continent. Chelvin seeks to build a consensus network of business, government a

ABOUT L’Escalier, Mauritius (from Wikipedia)

L’Escalier is located in the district of Grand Port on the island of Mauritius. It is a village near the mouth of the Rivière du Poste in the center of the triangle Savinnia, Savannah and the shack. This village is named after Daniel L’Escalier, civil commissioner during the French Revolution, and councilor of state in the metropolis. 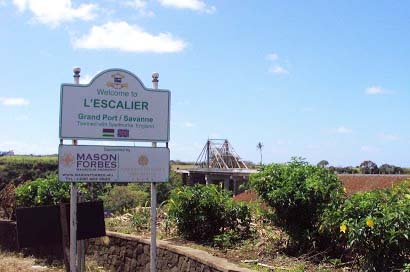 Mauritius, officially the Republic of Mauritius is an island nation in the Indian Ocean about 2,000 kilometres (1,200 mi) off the south-east coast of the African continent. The country includes the islands of Mauritius, Rodrigues, Agaléga and St. Brandon. The islands of Mauritius and Rodrigues form part of the Mascarene Islands, along with nearby Réunion, a French overseas department. The capital and largest city, Port Louis, is located on the main island of Mauritius. The country is 2,040 square kilometres (790 sq mi) in area, while its Exclusive Economic Zone covers 2.3 million square kilometres.

The village of L’Escalier is in the Grand Port, a district of Mauritius, situated in the east of the island. The name means “large port” in French. The district has an area of 260.3 km2 and the population estimate was at 112,997 as of 31 December 2015. 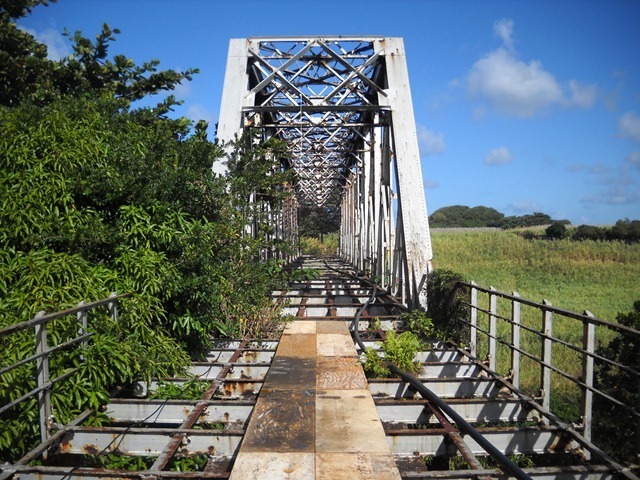 The special thing about this little village is that it is really peaceful and there is an unparalleled solidarity among the inhabitants. The village boasts a peaceful beach called “Le Souffleur” which is a hidden attraction known mostly to locals and a nature site where a steep coastline forms interesting rock formations such as the bridge-like “Pont Naturel”. This geological anomaly is a half-formed grotto on the side of a cliff, which spouts a geyser of water up to 20 metres in the air when seas are rough. 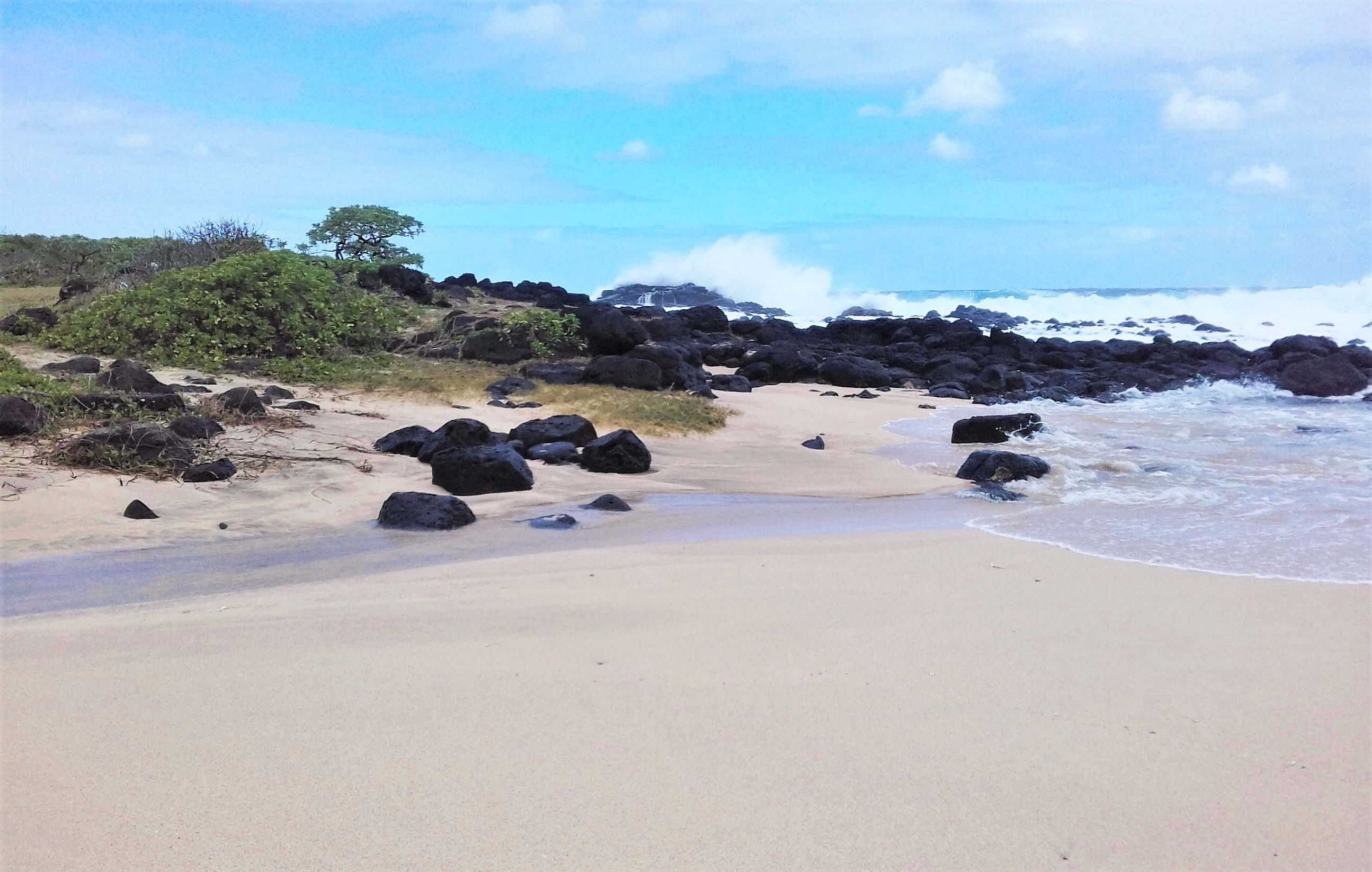 L’Escalier itself is a typical serene Mauritian village with a police station, a post office, a social welfare centre and a village hall. The inhabitants lead a peaceful life together, help one another like one big family, and are very welcoming to foreigners. At L’Escalier, sugar cane is still grown, and the mill that threshed and grounded it for several decades is still in service. The village has the Omnicane company which was launched in July 2009 through a strategic rebranding of Mon Trésor & Mon Désert Limited and it has since specialised in making optimal use of the whole cane, engaging in the cultivation of sugarcane and the production of refined sugar, bioethanol, thermal energy, and electricity.