These girls want peace and say no to violence done to women through
indirect sensitization by their clothing that speaks of peace.

Welcome to Aimé Waka and the students of the Bankoko Institute as well as the citizens of Mambasa who have established their community in D.R. Congo as a city of peace. Waka is a headmaster at the Institute and has developed along with colleagues a program of peace building through education and training. 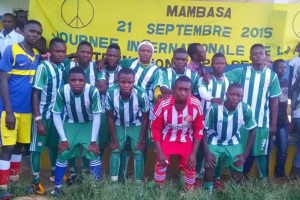 The BANKOKO Institute is a state school that was established in 2007 and has already provided more than 100 state diplomas. Currently we have more than 538 students with 52% of girls. This school organizes:
– General secondary (1st and 2nd)
– The social technical section (3rd to 6th)
– The nominal pedagogy section (3rd to 6th) The BANKOKO Institute has 25 agents including 3 women and 22 men. Only 3 agents are paid by the Congolese government and the others are taken care of by the parents who also have a low purchasing power. The BANKOKO Institute has 3 buildings, 2 of which are made of durable materials containing 3 classrooms each and one in sticks. The latter (in sticks) has 6 rooms. There is an administrative office and a block of 6 toilets, 3 for girls and 2 for boys. PROJECT VISION
To establish the notion or the culture of peace in 4 secondary schools of Mambasa because in schools in the DRC there is not a program related to the peace. 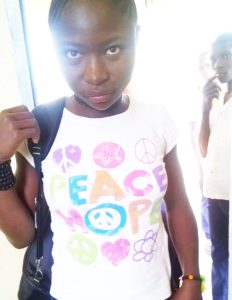 GOALS
The goals of the project will be achieved through training, awareness raising and school tournament. • Economically, Mambasa depends on agriculture, logging and mining.
• On the Socio-ethnic level, there are 7 original tribes as well as pygmies who are destitute and vulnerable, they live by hunting, gathering. There are also those who came from other backgrounds
• Geographically, this territory is located at 1 ° 22 ‘North and 29 ° 03’ East with a population of 671 607 inhabitants.The area of the territory of Mambasa is estimated at about 36 783 km2
• On the security front, there are armed groups that have exterminated the captive okapis in the EPULU faunal reserve, are currently being fought and are being thrown into the forest.
• On the religious level, Muslims occupy 1/3 of the Christian community. CHALLENGES
• Non-payment of 22 agents by the government
• Inadequate salary, US $100 per month
• The non existence of certain teaching tools: computer, internet networks, audio-visual materials
• Lack of conference room because in social technique normally the school must have a conference room
• The building in sticks must be replaced in durable materials because the sticks are already starting to rot, danger for our students
• The bamboo fence requires a hard fence

OBJECTIVES
– to create a partnership with organizations working for peace
– to create a partnership with secondary schools in the world
– to have opportunities to participate in conferences or forums on world peace
– to have contacts with peace-building organizations
– to have, if possible, financial partners
– to establish the culture of peace in our school through the course
of civic and moral education because in DRC, in schools, there is not
a program on peace.

My name is Aimé MANDRO WAKA, graduated in biology chemistry in applied pedagogy, married, father of 2 children, teacher since 2000 to 2011, prefect of the BANKOKO Institute since 2011 until today. Passionate about the promotion of peace from 2014 to the present day. I have never benefited from outside funding to organize activities with students in relation to peace, but with my own means I have always done so. I wish to have partners who can boost my efforts for the promotion of peace especially in the school environment. Member of the association called the Professors’ Club for the Initiation of Youth to the Culture of Peace and Development. Amié Waka, the headmaster at the Bankoko Institute (above). Giving a prize to a girl’s soccer winner (below). ABOUT MABASA, D.R. CONGO (from Wikipedia)

Mambasa Territory is threatened with deforestation due to illegal forestry to meet high demand for lumber by the bordering countries of Rwanda, Uganda, Burundi and Kenya, as well as to slash and burn cultivation and growing demand for fuel-wood by large numbers of immigrants from the east.

Ituri is one of the 26 provinces of the Democratic Republic of the Congo. Its capital is the city of Bunia.

The Ituri Rainforest is in this area. It is located northeast of the Ituri River and on the western side of Lake Albert. It has borders with the Uganda and Sudan. Its five administrative territories are:

Ituri is a region of high plateau (2000–5000 meters) that has a large tropical forest but also the landscape of savannah. The district has rare fauna, including the okapi, the national animal of the Congo. As for flora, an important species is Mangongo, whose leaves are used by the Mbuti to build their homes.

The Kilo-Moto gold mines are located in Ituri. In the beginning of the 21st century, petroleum reserves have been found by Heritage Oil and Tullow Oil on the shores of Lake Albert.