We welcome Mayor Mr. Young-hyun Baek, Pocheon’s 8th Mayor, the City Council, and the Citizens of the City of Pocheon, Republic of Korea as an International City of Peace

STATEMENT OF THE PEACE LEGACY OF POCHEON 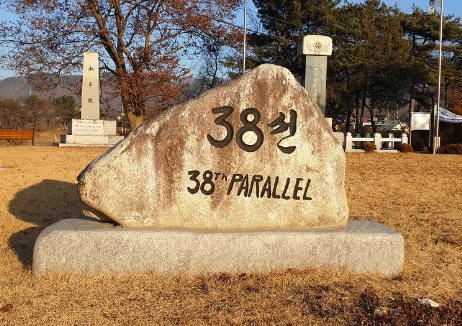 While Korea was restored with its liberty from Japan in 1945, the US and Soviet Union militaries were stationed on the Korean peninsula after liberation. They draw the 38th parallel as the military demarcation line to divide and occupy the Korean peninsula. For Yangmun-ri, Yeongjung-myeon, Pocheon-gun, Gyeonggi-do at that time, about 60 of about 100 households were included in South Korea and the other 40 households were in North Korea. Since then, there have been numerous tragic events.

Pocheon 38th Parallel Stone Marker indicates the 38th parallel dividing the Korean peninsula into a southern and northern region. The 38th parallel symbolizes the division and tragedy of the country and the desire for peaceful reunification. On another natural rock, ‘THE 38th PARALLEL’ both in Korean and English is written. 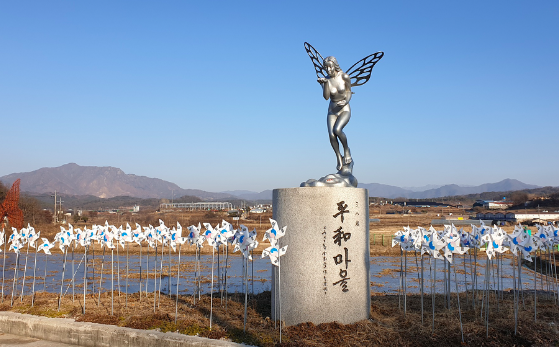 The Changsu-myeon area was divided into South and North Korea after the Korean War. As it is in the 38th parallel region, military facilities were scattered in Changsu-myeon, even after the truce.

The late Kim Gwangsu was born in 450, Juwon-ri, Changsu-myeon on March 18, 1941. He devoted himself to his studies, even in the difficult circumstances during the Korean War. Then, he became a great man in the art world in Korea gaining fame as a world-class sculptor, being favored by Pocheon, and developing lots of students in college. After he worked as the dean in the College of Arts at Dong-A University, he returned to his hometown. While he focused on his creative work, he heard that there was not enough land for the building of a community center. Then, he donated his land of 128m2 at 434-3, Juwon-ri. Moreover, he became an example to residents by donating the ‘Statue of Peace Goddess’ he created. 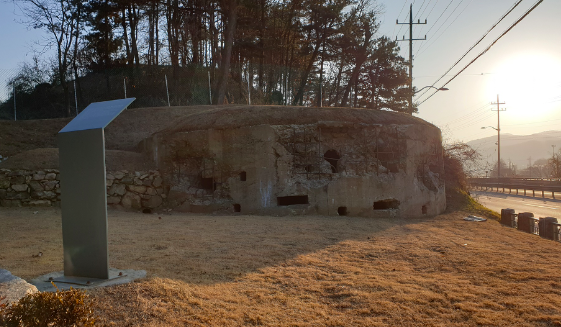 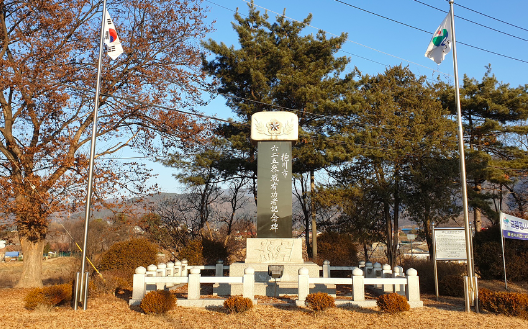 Pocheon residents fought against the North Korean army for the country and liberal democracy during the Korean War. Lots of young men died or were injured defending the homeland during three-year war beginning with the North Korean invasion of South Korea on June 25, 1950, including retreats, defenses, counterattacks and the advance northward by the South Korean army, the battle to regain high ground around the 38th parallel and operations to suppress the North Korean partisans.

ABOUT THE CULTURAL HERITAGE

This document contains many cultural places in or near Pocheon, such as the Pocheon National Arboretum. You can download or navigate the document by clicking on the up/down arrows on the left top page.

– Hub city of peace tourism on the Korean peninsula for the New Korean Peninsula System and Reunification.

– Building the city of peace with forest and water resources recognized by UNESCO.
• Pocheon National Arboretum was designated as a Bioshpere Reserve of UNESCO (June 2010).
• Hantangang Geopark will be listed as World Geopark of UNESCO (scheduled for April 2020).

– Keep the historic and cultural heritage sites and tourism resources in good condition and creatively pass them on to local communities and their descendants.
– Implement the education for fostering and expanding the peace culture in the community and prepare for the future reunification through the administration and communication with citizens.
– Extensively share the peace heritage in the community by forming a network with the cities of peace all over the world.
– Implement the road, railway and aviation infrastructure for activating tourism linking South and North Korea.
– Propose the direction for the development in peace tourism on the Korean peninsula by developing the peace tourism products linking the Hantangang River, the DMZ, and Naegeumgangsan Mountain. 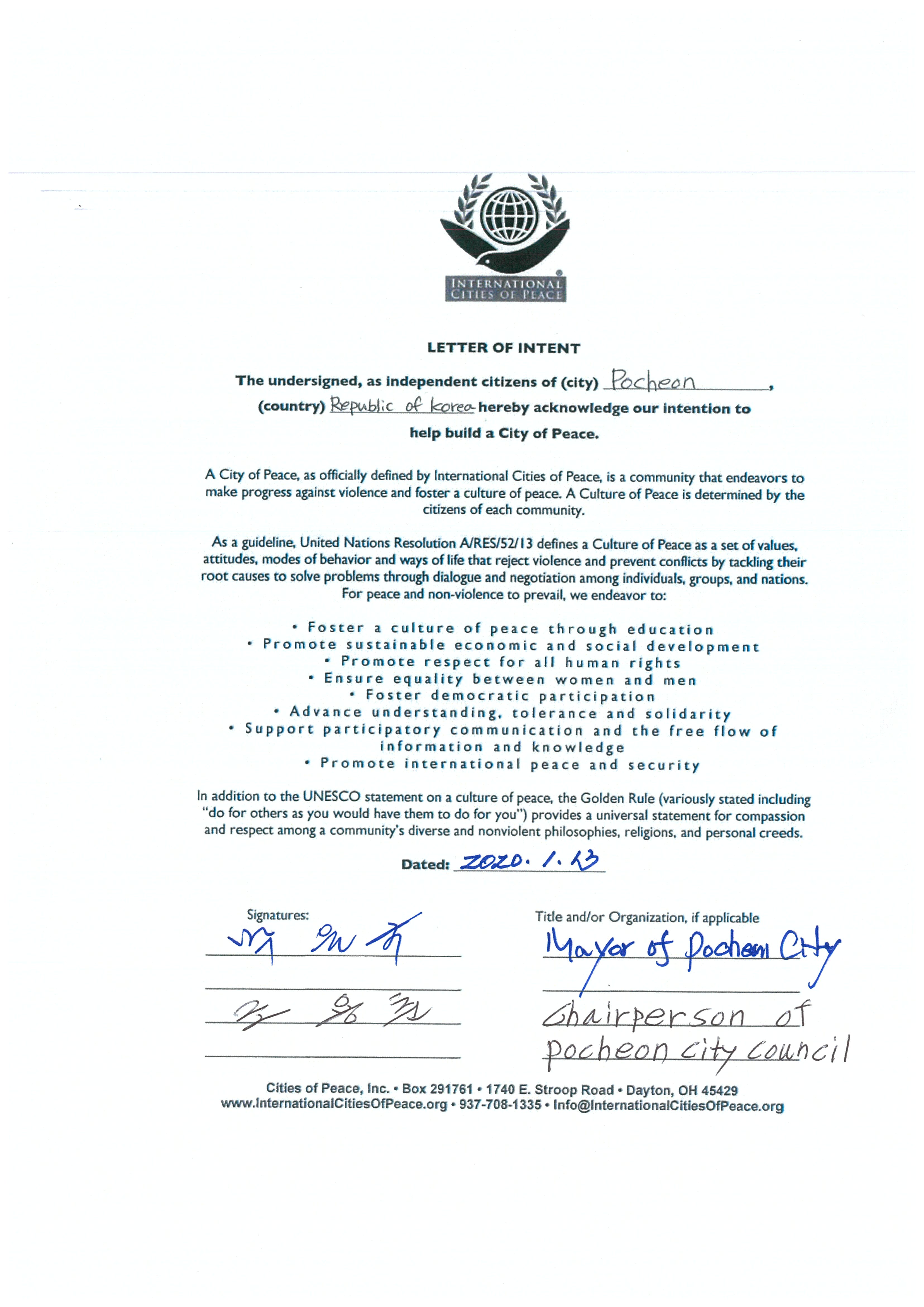 ABOUT POCHEON, SOUTH KOREA (from Wikipedia)

Pocheon is a inland city in the far northeastern region of Gyeonggi province in South Korea. It has a population of 160,176 people, according to the 2008 census. Pocheon lies between Seoul and the mountainous northwestern areas of Gangwon province.

The city borders Yeoncheon county, with the cities of Dongducheon and Yangju to the west, along with Uijeongbu, and Namyangju of Gyeonggi province to the south. It also borders Hwacheon county of Gangwon province on its eastern border and Cheorwon is to the north. Alongside the adjoining Gapyeong, Pocheon consists of the highest mountainous areas in Gyeonggi province. The current city of Pocheon was created after Pocheon-hyeon and Yeongpyeong counties were merged. The north part of the city used to be part of Yeongpyeong county while the south used to be part of Pocheon-hyeon.

The city of Pocheon belonged to Mahan during the Samhan period. and was part of Mahol during the Goguryeo period. After the Korean peninsula was unified by Silla, it was called Gyeonseong-gun (堅城郡). As Silla was absorbed by the ruling dynasty, Goryeo, the name was changed to Poju-gun (抱州郡) in 995, the 14th year of King Seongjeong’s reign. During the King Hyeonjong’s reign, the region belonged to Yangju-gun, Yanggwang-do. In the next ruling dynasty, Joseon, the region was named Pocheon-gun after the eight province system was established in 1413.