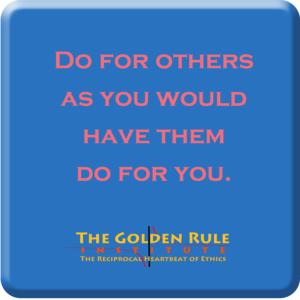 The Golden Rule, or the ethic of reciprocity, is a maxim, ethical code or morality that essentially states either of the following:

1. One should treat others as one would like others to treat oneself. (Directive form.)

2. One should not treat others in ways that one would not like to be treated (Cautionary form, also known as the Silver Rule).

This concept describes a “reciprocal” or mutual exchange between one’s self and others that involves both sides equally, and in a mutual fashion. 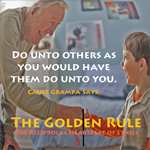 The Golden Rule Institute has the following vision, mission, and goals:

To promote the Golden Rule as the ethical prime of human conduct.

To network, promote, document, and provide information and resources for leaders and organizations working to make the Golden Rule a driving principle in society.

• Network adherents and theorists of the Golden Rule.

• Provide an independent resource for the Golden Rule.

• Act as an information warehouse on application of Golden Rule principles.

• Document the history and scholarship of the Golden Rule.

• Promote the Golden Rule as “The reciprocal heartbeat of Ethics”.

BECOME A MASTER OF THE GOLDEN RULE

“Though at first glance simple and direct, the Golden Rule is deeply seated with a profound wisdom that can only be mastered over a lifetime. It requires thought and training to be of greatest value and there are steps toward fully utilizing its power. To become a master of the Golden Rule ethic and achieve its transcendent quality, four processes become apparent. 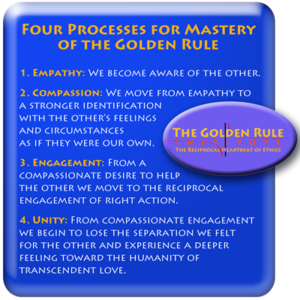 “The wisdom of practicing the Golden Rule is more than a primeval clarion call to “do the right thing.” It is the two-way street upon which our humanity travels. Reciprocity, or mutual exchange, is the clear and profound operative of the Golden Rule. Its fundamental ethic is our call to peaceful interaction. An ancient moral principle passed down from generation to generation from earliest humans to the modern world, the Golden Rule underlies our common values and has allowed humanity to survive and flourish.

“As the ethical prime of human conduct, the Golden Rule provides an ancient, genetically-encoded or memetically-transferred moral foundation to meet our challenges in the future. It is the dynamic energy, a conscious decision-making mechanism that when applied to our economic, political and social systems, results in fairness and sustainability. With depthless, yet understandable dimensions of mind, body and spirit, the Golden Rule is the principle that guides us from self-centered and bordered consciousness toward the expansive love that lifts the wings of our evolution.”

— Excerpt from “The Economics of Peace: Freedom, the Golden Rule, and the Broadening of Prosperity” by J. Frederick Arment. © Copyright, 2014

International Cities of Peace™ is a nonprofit, tax-exempt association dedicated to connecting, promoting, and encouraging the global cities of peace movement. The Golden Rule Institute is dedicated to those working in cities across the world in their efforts to foster a culture of peace.